I really enjoy using E61 espresso machines. They’re classic, built to last, and are consistent performers. And for that reason, I’ve always been a fan of “home friendly” or “compact” E61 designs such as the Rocket Appartamento and Diletta Bello I previously reviewed. Today, we’re looking at a relatively new contender in this space, the Profitec Pro 400, which has managed to pack a LOT of features into its counter-friendly from factor. Should you be considering it? Let’s find out! 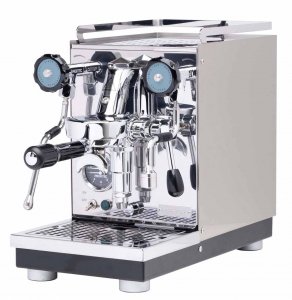 Starting off with the build quality and design, the Pro 400 immediate stacks up VERY favourably against other similar machines in its price range.

Profitec machines are designed and built by hand in Germany, and this is apparent from the second you unbox it. I have ZERO complaints about the build quality. Normally I can nitpick about one or two spots on a machine where I feel like they’ve skimped, but not so on the Profitec. Even the cup rail is super solid and looks great, unlike some other machines… cough cough…

In terms of the design, I originally wasn’t a huge fan when I first saw it in photos, however, when I got it on my counter-top my mind was changed.

It’s a good-looking machine. Simple, not flashy, but the way mixes polished metal, brushed metal, and black accents together just looks…. Right… I really do like it. It’s not just a big chrome cube like some other E61s, the sizes are actually brushed metal, while the front is a mirror finish. It also comes with interchangeable colors disks for the steam and hot water knobs, which I do find a BIT gimmicky, but I think that we could start seeing some really neat third-party ones in the near future which could be cool. For now, I’m sticking with blue.

As I alluded to in the intro, this is also a very compact machine, when placed side by side the modestly sized Appartamento looks borderline beefy in comparison. The Pro 400 is just under 9” wide and should be able to fit in all but the tightest of kitchens.

Moving onto the feature set, this is what immediately stood out to me about the Pro 400, especially given its price point. It has a large 2.8L water tank, accessible from the top of the machine. Also accessible from the top of the machine is an easy adjustment to brewing pressure, no need to tear off all the body panels to get to a buried valve. In the box, you get a very basic but not terrible tamper, both single and double spouted portafilters, as well as a blind basket for cleaning.

Moving on to the really good stuff, on the bottom of the machine there is a 3-position switch, for 3 boiler temperatures, and corresponding brew temperatures. This allows you to adjust the temperature for your specific coffee, as well as get an extra hit of steaming power by turning the boiler into its highest temperature mode.

On TOP of adjustable temperature, the Pro 400 also includes an automatic low-pressure pre-infusion. Not just the natural pre-infusion from the E61, a TRUE pre-infusion that runs for 5 seconds, and then pauses for 3 seconds before ramping up to full pressure. You can see this working in real time on the combined boiler pressure and brew pressure gauge. If you don’t want the pre-infusion for some reason, you can also toggle it off, and the same thing for a built-in eco-mode that shuts down the boiler after 90 minutes of inactivity.

To put in bluntly, the Pro400 kicks the crap out of the very popular and equally priced Rocket Appartamento from a feature-set perspective.

Moving on to the user experience, I’ve really been enjoying my time with the Pro400, and am having a hard time deciding whether to keep it or send it back once this review is over.

The machine warms up quickly, and the slightly above average sized water tank is nice in how it reduces the number of times you need to fill it up. One thing I’m not a huge fan of, is that you need to lift off the entire top panel to access the water tank, but admittedly, it is a much cleaner look than a small lid.

The light on the front of the machine is used to show power, indicate low water, and also help in the programming process when toggling the pre-infusion or eco-mode on and off. One thing that I immediately noticed is that it is VERY bright, which shouldn’t be an issue because it’s turned off most of the time, but it’s definitely something to note.

In addition to the large water reservoir, the drip tray is also well sized, and as an added bit of foresight below they also included cut out in the frame for the blind basket. One small thing that does annoy me about the drip tray is that it doesn’t just slide straight out, you need to tilt it, and then lift it, which can get tricky if it’s very close to being full.

Moving on to the espresso quality, the Pro400 has a notable leg up compared to many other E61 machines. Having the option to turn on or off an automatic low-pressure pre-infusion is a great feature to have. Gently introducing water at the beginning of the extraction for 5 seconds, and then pausing for 3 seconds, helps saturate the puck evenly, allowing it to expand and fill in any puck imperfections before hitting it with full pressure.

On top of that, the Pro 400 also allows you to toggle between 3 pre-set temperature settings. No, this still does not give you the degree-perfect adjustment of a full PID, but I think Profitec have made a very clever move here, offering temperature adjustment without the large cost premium that adding a PID normally has. You’re able to use the lower temperature setting for darker roasts to take off some of the bitter edge or get extra temperature for those difficult to extract lighter roasts.

The other benefit of boosting the temperature is added steaming power. I found putting the boiler into its highest temperature mode reduced the steaming time for a single drink from 24 seconds to around 19 seconds. This might be a little unnecessary unless you’re steaming a very large volume of milk, but it’s good to know it’s there. Just remember, if you’re brewing another drink at a lower temperature afterwards, you’ll have to remember to purge the group head of overheated water.

The steam arm on the Pro 400 is a no-burn arm, as I’d expect for a machine at this level, which is safer, and makes milk cleanup a whole whole lot easier. The Pro 400 comes with a two whole steam tip, and is capable of steaming great quality milk, very quickly if you’re trying to serve multiple drinks back to back.

So, do I recommend this machine, and who do I think should buy it?

Yes, I absolutely recommend this machine. I think that Profitec has created an absolute no-brainer leader in this market segment with the Pro 400. They’ve taken all the features that people care about, pre-infusion, temperature adjustment, a big water tank, easy access to pressure adjustment…. And they’ve put it into an attractive, well-built, and competitively priced package.

If you’re looking for a reasonably sized and reasonably priced E61 machine for your home, this is absolutely one that should be at the top of your list to check out.