On the table today, we have a machine that I am EXTREMELY excited to review, and quite honestly am surprised is not getting a whole whole lot more attention. This is the Profitec GO, a brand new machine from the German manufacturer known for amazing build quality and value at pretty much every price-point. Now, they’re dipping their toes into the entry-level, single boiler market, and if trickle-down technology is a thing, this is going to be one heck of a machine. Should you be considering it? Let’s find out! 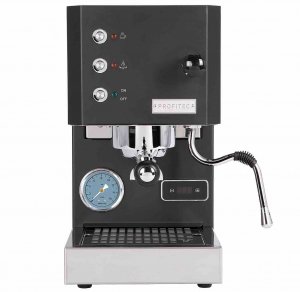 As mentioned , the first thing that always impresses me about Profitec machines is the build quality. Their machines are hand-made in Germany, and from my experience never sacrifice when it comes to the materials used, not only in high touchpoint areas, but throughout the entire machine. But this is easier to accomplish with higher-priced machines like they are used to making. So what about the GO?

Thankfully, Profitec have stayed true to their roots even on this new more budget friendly offering. Every surface is made of beautifully finished metal, and tolerances feel just as good as on their other machines.

The buttons feel very robust, giving a satisfying click, and even the PID display is surrounded in a subtle touch of chrome. If I had to point out two areas that don’t LOOK as high end, it would be the way the body panels connect at the back, and the fact that the water tank cover just kind of sits on top instead of locking in nicely to one position.

The portafilter is heavy, and almost identical to those found on other Profitec machines. Except, they’ve opted to change the spouts to a more rounded shape. I have no idea why companies go this route on their less expensive models, but functionally they are exactly the same.

In terms of the design, Profitec have taken a somewhat surprising approach, straying away from their typical polished metal finishes, and opting instead for matte black on the main body panels.

Most striking of all is the light blue background on the pressure gauge. I’ve said this before, and I’ll say it again, I love seeing companies starting to have some fun and not taking espresso so seriously. In my opinion, this is a great looking machine.

From the front, this machine is not visually all that different than Gaggia Classic Pro, but it is 5 inches deeper, about an inch taller, and almost 50% heavier… still, this is a very modest sized machine that should easily fit in most kitchens, and under most overhead cabinets.

However, within this tiny package, Profitec have fit in a good number of important features which we’ll go over in the next few sections of the review.

Living with the Profitec GO has been very enjoyable. The boiler gets up to temperature in around 7 minutes, and then proceeds to heat everything including the portafilter and cup warming tray very effectively.

You can see when the machine is up to temp thanks to a very clear PID display, through which you can adjust the brew temp AND steaming temp, and it also acts as a shot timer during brewing. This PID is very nice because it shows a true live reading, not just the set temp. On a single boiler machine this is EXTRA important, as it allows you to efficiently and accurately switch between brewing and steaming temperatures.

Like other Profitec machines, the water reservoir is also slightly oversized at 2.8L, meaning you have to refill much less frequently than on some competitors. The drip tray is also deceptively large, pulling straight out making it easy to empty when needed.

Other than that, operating the machine is very straightforward. One button for power, one button for brewing, one button to heat up to steaming pressure, and then a variable steam knob.

When it comes to espresso brewing, people will be very happy to hear that the GO has an all metal hot water path, which is great to see at this price point. It uses a 400mL insulated brass boiler, and a commercial sized 58mm portafilter making finding accessories or aftermarket parts very easy.

The PID provides excellent thermal stability over the course of the shot, leading to very consistent results back to back to back.

Something Profitec have started doing and I’m VERY happy to see on this machine is tool-free access to the OPV adjustment. The machine ships running at 10bar at the pump which equats to 9bar at the group head, but having the option to tweak, recalibrate, or play around with other pressures is a really nice feature.

The combination of all these things leads to the GO being a great performer for espresso that can easily hang with more expensive machines thanks to its generous list of features.

When it comes time to switch over the steaming, the GO will take around 1 minute to reach a programmed 130 degrees due to the large boiler size. However you can reduce this by changing the steaming temp to its highest mode of 140, in which case the time to reach the same 130 degrees drops to only 40 seconds.

OR, of course you can steam you milk first, and then watch the PID as you quickly flush the boiler back down to brewing temp to pull your shot.

Regardless of which method you use the Profitec GO then has GREAT steaming power in store. It will take just over 20 seconds to steam a single drink, which is equal to or even slightly faster than the Rancilio Silvia we reviewed previously.

The steam arm has plenty of adjustment in the ball joint, and uses a two hole steam tip. However, it is not a dual wall steam arm, instead opting to use a rubber grip to protect your hands.

In fact, that lack of a dual wall steam arm might be my one nitpick about this machine over all. And quite frankly, I’m getting a little bit tired of how hard it is to find fault in these new Profitec models…

This company is clearly VERY good at listening to customer input about what features are most important, and finding holes in the market to fill with their machines. First the Pro 400, and now the GO.

At this price-point, this machine is simply a very easy choice compared to other options on the market. Yes, the Rancilio Silvia is slightly cheaper, but it doesn’t have a PID, shot timer, external OPV adjustment, oversized water tank… Paying the extra for the Profitec GO is a no-brainer, and if you’re shopping in this price-point, then this is absolutely a machine that you should be considering.