Today, we’re going to be comparing two very powerful, very popular, but very DIFFERENT espresso machines. The Breville Dual Boiler, and the Rocket Appartamento. To some buyers, the choice between which of these machines to get may seem like a pretty tight race. But unlike some previous comparisons where I leave the conclusion relatively open-ended. With these two machines, I believe that one will suit you far better than the other. It just depends what you’re looking to get out of a home espresso experience. 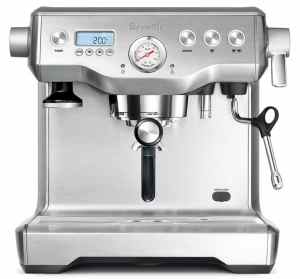 Starting off by looking at the physical machines, it might surprise some to see how much larger the Dual Boiler is. It has the same overall appearance of the other Breville’s, but has been supersized in almost every dimension. Heat exchanger machines are not exactly known for being compact either, but the Appartamento is more space conscious than most E61 machines, and in comparison to the Breville, looks almost petite.

The Appartamento is quite traditional in build, with a polished stainless steel shell and drip tray, and overall everything feels as nice to touch as it is to look at. With that being said, I also really like the look of the Breville machines, as I think they’re contemporary, and fit in well with a range of kitchen styles. Both of these models also put some consideration into design on the rear of the machines, which is nice if you plan to place it on an island

Independent of size and appearance, the build quality and finishing on these machines is also very different. When placed side by side, it is very apparent that the Breville is a more “consumer” or “appliance” level machine. There’s far more plastic used throughout the build, and things such as locking in the portafilter or actuating the steam don’t have the same rock solid feel that the Appartamento delivers. A small, but pretty clear example of this is with the included tampers. The Breville’s is light and plastic, whereas the Rocket’s is made of a solid piece of metal. This difference can be felt pretty much everywhere you look, from drip tray to the water tank cover.

Quickly running through the features of each machine, we’ll start with the Dual Boiler as there a LOT more to cover.

Three buttons on the front allow you to program in your desired single and double shot volumes, or run the machine completely manually. A digital screen allows you to dig deeper into brew settings such as temperature, and pre-infusion, schedule times for the machine to automatically power on or off, and access things like the cleaning and descaling cycles. A knob on the left controls the hot water outlet, and on the right a lever controls the steam. Some really nice added convenience features are a front water filling port and viewing window, a hidden storage area behind the drip tray, and a built in castor system for moving the machine around.

Looking at the Appartamento, the list is shockingly short in comparison. Brewing is actuated by a manual lever on the right of the grouphead, which starts and stops only when you choose to start and stop it. The right knob provides hot water, while the left controls steaming…. And that’s really it…

Stopping here to look at what we’ve covered so far, you might start to get a sense of what I was getting at when I said that one of these machines will suit you better. The Dual boiler, has a laundry list of features that will make brewing more convenient, more repeatable, and certainly more customizable, but at the cost of some build quality and manual machine charm. The Appartamento is built like a tank, and about as simple as an espresso machine comes, with manual controls for steam, brewing, hot water, and that’s IT.

Next, let’s take a look at the actual PERFORMANCE of these machines, starting with milk steaming. Both the Dual Boiler and Appartamento have the ability to brew and steam simultaneously, which will already be a HUGE time saver if you’re upgrading from a single boiler unit.

In terms of brute power, however, the Appartamento does come out clearly on top, being about 30% faster at steaming your milk of choice. Another thing absolutely worth noting is that the Appartamento features a no-burn steam arm. The dual walled design means that the arm will not get scalding hot, which is not only safer, but also prevents milk from aggressively burning on during use. This is a feature you may not have been previously shopping for, but trust me, you want it.

Shifting to espresso quality, these two machines again take very different approaches to brewing and maintaining stable temperature. The classic E61 grouphead of the rocket constantly circulates water through the 9 lbs of solid steel. This huge thermal mass results in consistent temperatures, assuming that you first flush the group to purge out any overheated water vapour that can form if you leave the machine sitting for long periods of time.

In comparison, the saturated group of the Dual Boiler takes a more modern approach, employing two pairs of PIDs and heating elements, one in the boiler, and one directly at the brew head. This not only results in it being temperature accurate to a claimed +/-1 degree Celsius, but also gives you the ability to adjust the temperature anywhere from 86 to 96 degrees Celsius. The option to adjust brew temperature is a big advantage to the Dual boiler, as it allows you to tweak your extraction to accommodate for particularly easy or difficult to extract coffees.

And the Dual Boiler’s advantages don’t stop there. My personal favourite feature of the Dual Boiler is the ability to program in both pre-infusion duration, AND pressure. If you wanted you could run a very low pressure, get this, 90 SECOND pre-infusion… and while going THAT extreme may not be necessary, the ability to achieve these low pressure, customizable, and repeatable pre-infusions is feature that not many machines in ANY price range offer.

The Appartamento’s E61 will allow a light pre-soak by holding the lever close to the trigger point, and has a mechanical pre-infusion as the group ramps up to full pressure, but it’s basically a one size fits all solution.

So as you may have inferred from that onslaught of information, the Dual Boiler is overall a much more adjustable, consistent, and in many ways capable machine when it comes to dialing in your espresso extractions, easily outpacing anything remotely close in price.

But if at any point throughout that explanation your eyes glazed over, and simply didn’t have any interest in digging THAT deep into each coffee you brew, then I would urge you to consider The Appartamento. In comparison, it’s almost shockingly lacking in features, especially when you remember the price difference. But the classic looks, rock solid build quality, and enjoyment you get from operating a more manual machine are things that should not be ignored. For every inch that the Breville is more technically capable, the Rocket is equally more enjoyable to actually use as a tool in your daily coffee ritual.

If I had to make a comparison, the Breville Dual Boiler would be like a Tesla Model 3, while the Rocket Appartamento would be a manual Porsche. The Porsche is more expensive, has fewer features, and probably isn’t as fast, but the build quality is far higher, and purists will argue that the driving experience is far more engaging and enjoyable. The Tesla has far more features, and is arguable more capable in almost every way, but doesn’t quite have the same build quality, or manual engaging drive. And just like the Dual Boiler and Appartamento, both Tesla and Porsche have dedicated groups of brand-loyal followers that will argue that one is clearly better than the other.