Breville Espresso machines are widely known as some of the most popular available for home use. So much so, that last year we made a point to buy and review every single one… well maybe not every one, because the “Touch” variants were notably missing from that article. So today, we’re circling back, and reviewing the Barista Touch by Breville. Is it just a Barista Express with a screen slapped on? Let’s find out! 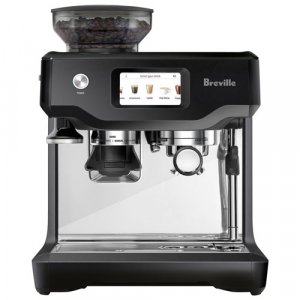 Jumping straight into the review, let’s start off with the build quality and design.

This is one area that was instantly surprising for me when I first unpacked the machine. It uses the exact same form factor as the much older and less expensive Barista Express. But the touch screen, combined with the newer matte finishes and lack of knobs and buttons, makes this machine appear so much more premium and modern when sat on your counter-top. I didn’t expect to like it, but I did.

However, this is only superficial. From a build QUALITY perspective, this machine is very very similar to the Barista Express it’s based on. This is not a BAD thing, as the Barista Express is a solid foundation to build off of, but don’t expect to get any extra premium finishes for your extra money.

The Barista Touch has a 2L water tank, top mounted hopper, 54mm portafilter, built in tamper, hot water spout and a large drip tray with storage in behind. The grinding is still relatively messy when grinding straight into the portafilter, so just like any of the Breville machines, I do recommend picking up a dosing cup up to make your life easier.

One notable difference with the Touch is the inclusion of an automatic steam wand and temperature sensor, which we’ll take a look at later on in the article.

Speaking of functional differences, let’s move on to the actual user experience, as this is undoubtedly the area that is the most different when compared to the Breville’s other more analog models.

Despite using a similar outer shell to the Barista Express, the Barista Touch is absolutely NOT the same under the hood. Because it’s a newer generation machine, it benefits from Breville’s newest Thermojet heating system which is also found in the Barista Pro. This allows the machine to reach brewing temperature in only 3 seconds. Yes, you heard that right, 3 seconds.

The downside of this system is that it runs very cool, so the group head will NOT properly pre-heat the portafilter by simply locking it in. You’ll need to run 1 or 2 blank shots to get the metal warmed up before pulling your first espresso of the day.

Moving on to the touch screen itself, there is a lot to unpack, but I was easily able to find my way around without needing to look at the user manual which is always encouraging.

The main screen shows a variety of drink icons, which when clicked, pre-load a corresponding set of drink parameters including grind time, shot length, milk texture, and milk temperature. Each of these icons can be customized to whatever settings you want, and you can even add additional custom recipes with their own photos and names if needed.

Once a recipe is selected, the machine will prompt you through grinding, brewing, and steaming the milk, showing you the status live as you go, and even purging the steam arm automatically once you’re done using it.

This workflow was quite nice, and I really don’t have any complaints, other than that there isn’t a dedicated button for a quick group head purge, which would have been a nice feature. Instead you have to just start the shot, and then stop it like on any other machine. I know, what a hardship.

An equally large advantage to having the touch screen is in situations where you want to change settings, or perform cleaning cycles. There is one simple menu that easily allows you to find what you’re looking for, which is WAY nicer than the cryptic combinations of button presses that other Breville owners may be accustomed to.

Is the screen a necessity? Absolutely not. Is it nice to have? Yes, yes it is.

Moving on to the espresso quality, the Barista Touch hit me with yet another surprise.

Despite using the exact grind setting wheel from the Barista Express, the Touch now has 30 steps of grinding range compared to the 18 on the Express. This is a great improvement, as it allows for much more precise dialing in of your coffee without as much risk of the setting you want falling in between two grind steps which does happen on occasion on the lower-end models.

Another advantage of the Barista Touch is that it operates at a more traditional 9 bar brew pressure at the group head. You may see it advertised as “15 bar”, but not only would that be undesirable, but it is also not true. 15 bar is the PUMP pressure which marketers like to cling onto because they think higher numbers are always better… At the group head, the machine is providing a traditional 9 bars of pressure, which is ideal for providing even and consistent extractions.

The espresso quality from the Barista Touch will be on par with that from the Barista Pro, which is to say that is very good for a consumer level machine. Yes, I would have liked to see a 58mm portafilter in this price range, but with the current setup, you can dial in some seriously good shots with a little practise.

Steaming performance on the Barista Touch was a bit hit and miss for me, however I think that those who are drawn to the convenience of this machine will be perfectly satisfied. Let me explain.

The Barista Touch uses a panarello style steam arm to automatically introduce air to create the exact temperature and texture you program in. And if your goal is to achieve a drink with hot foamy milk, then you will be completely happy with the system. Full stop. It does that, and it does it very well. The thermojet heating system allows for a very fast transition between brewing and steaming, as well as steaming speeds that are on par, or slightly faster than other machines in this product category.

It should be noted, that because the temperature sensor measures on the outside of the pitcher, it means that the actual milk temperature is around 5 degrees warmer than the displayed temperature. Not a huge deal, simply tweak the temperature to taste.

My only complaint, and where you might be slightly disappointed in this system, is if you want to have absolute control over your milk texture for latte art. Getting very fine microbubbles is very important, and this panarello was just a little hit and miss. You’ll always get nicely textured milk, and be able to make some blobs and hearts just fine, but don’t expect a masterpiece.

If this is what you want, you’ll be better off going with the manual steaming of the Barista Pro, and taking the time to learn how to steam the perfect milk. Just keep in mind, that this is a lot more involved, and will take a lot of practise, hence why Breville offers to do it automatically for you on this model, and as far as automatic steaming goes, it does a very good job, producing notably better results than the very simple panarellos you get on cheaper machines.

At the beginning of this review I asked, is this just a Barista Express with a touch screen. And the answer is no.

Despite using the same shell, the Barista Touch packs in Breville’s latest thermojet technology, providing blazing fast startups, 9 bar brewing, and quick steaming. For that reason, this machine is best summarized as a Barista Pro, with a touch screen, and automatic milk texturing.

So if you put convenience and ease of use at the top of your list of requirements for a home espresso system, then the Barista Touch is absolutely one you should be checking out. But if none of these features stood out as must haves, then you’d be better off sticking with the less expensive Barista Pro.