The Breville Barista Pro and Delonghi La Specialista Prestigio are two very popular home espresso machines, at very similar price points, whose specs look very similar on paper. My job today is to help you figure out which one is going to be best for you.

I think these are both great looking machines. With the DeLonghi you get a more classic looking design out of Italy. The Breville on the other hand has a more rounded-off, and modern appearance, utilizing a digital display instead of the primarily button driven interface on the Prestigio. 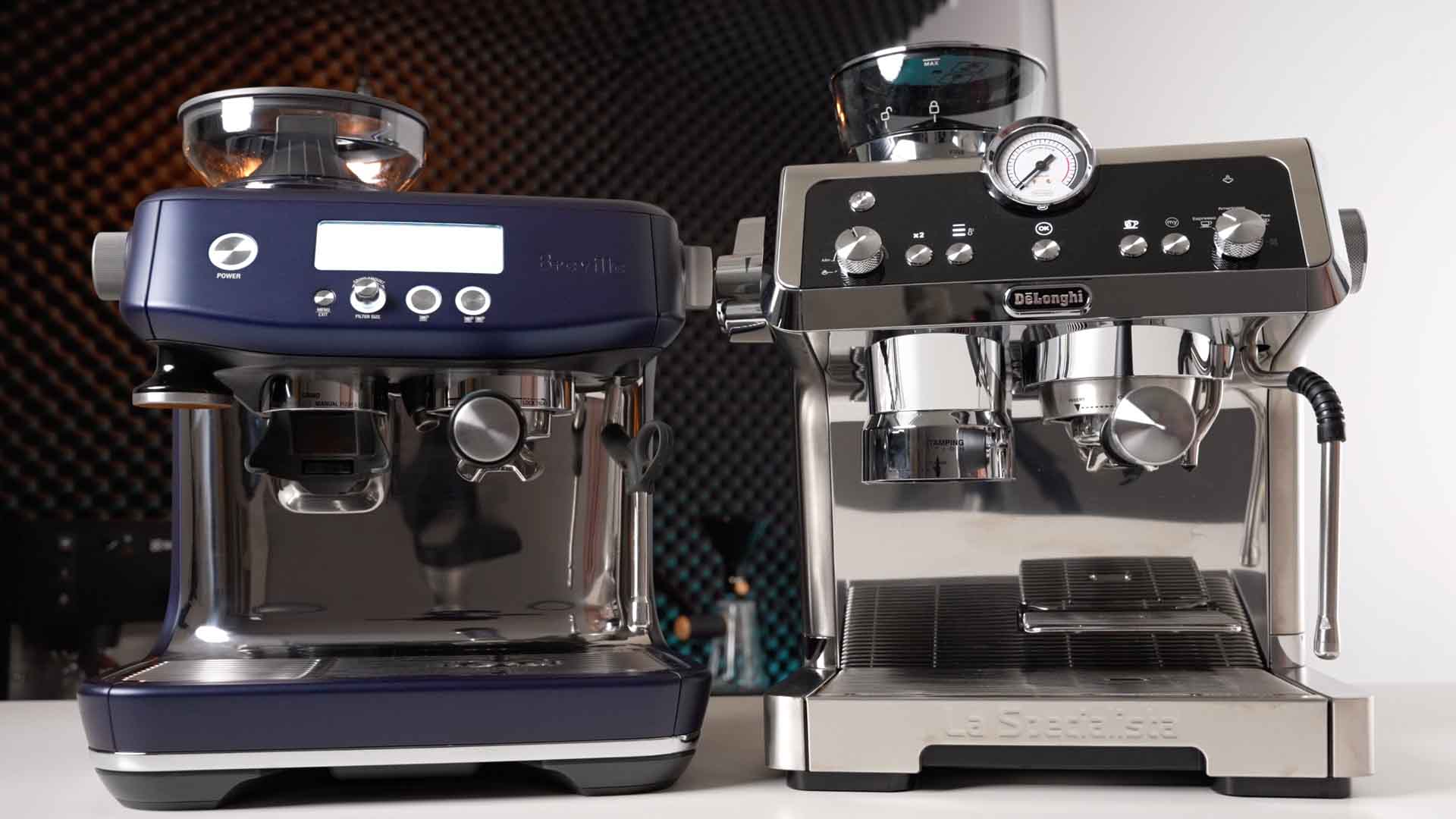 One thing I didn’t love was the amount of “fake chrome” used on the Delonghi, if you’re going to use plastic, just let us know it’s plastic. However purely based on looks, which one you prefer is completely subjective, so let’s move on to some more quantifiable differences. 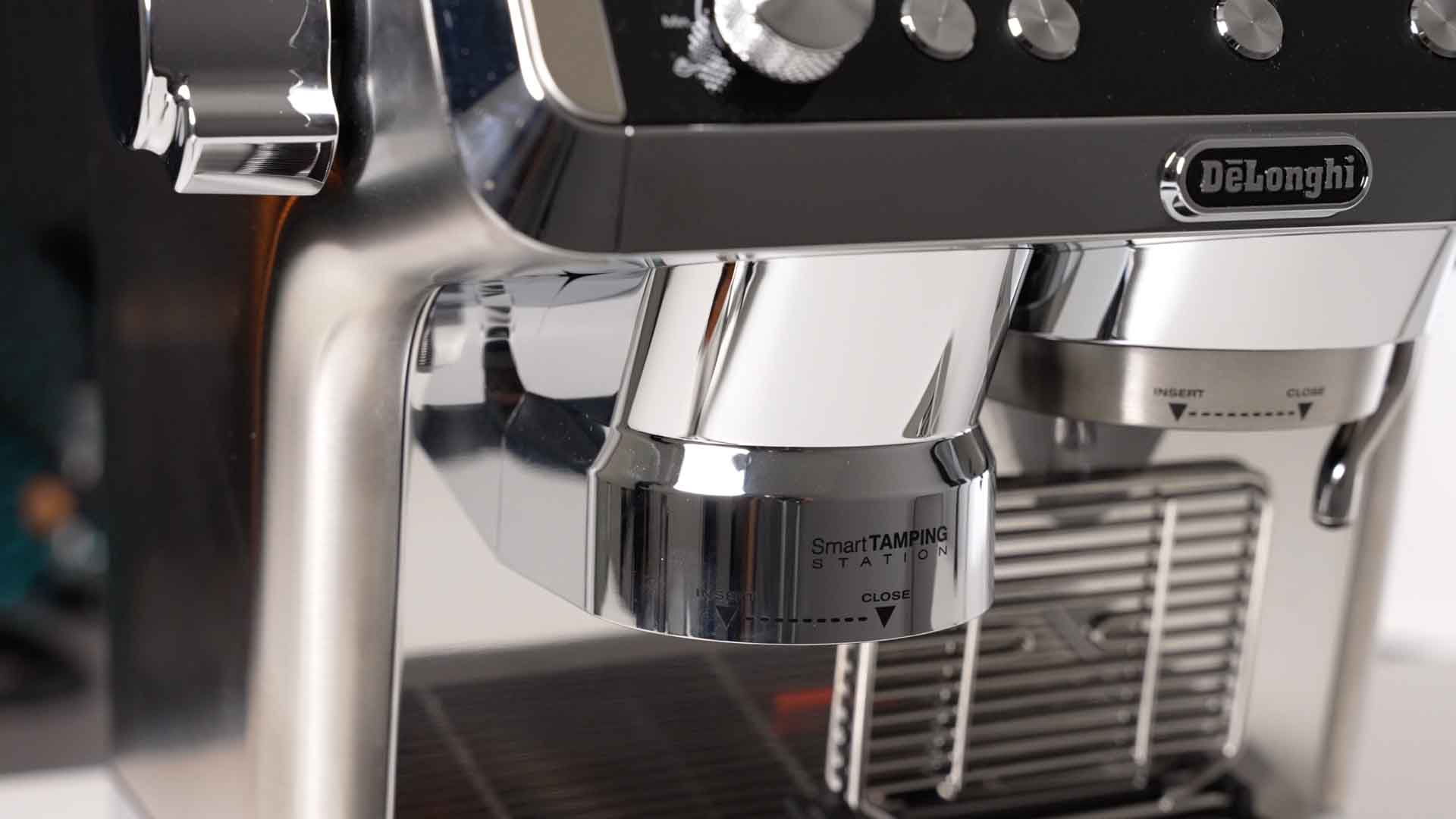 Both machines have about the same depth, but the DeLonghi is 3.1cm wider, and 3.4cm taller. Both have 2L removable water reservoirs, and around 250g capacity hoppers. The drip trays both good capacity, with indicators to tell you when to empty them, but the Breville also has a handy storage compartment hidden in behind. 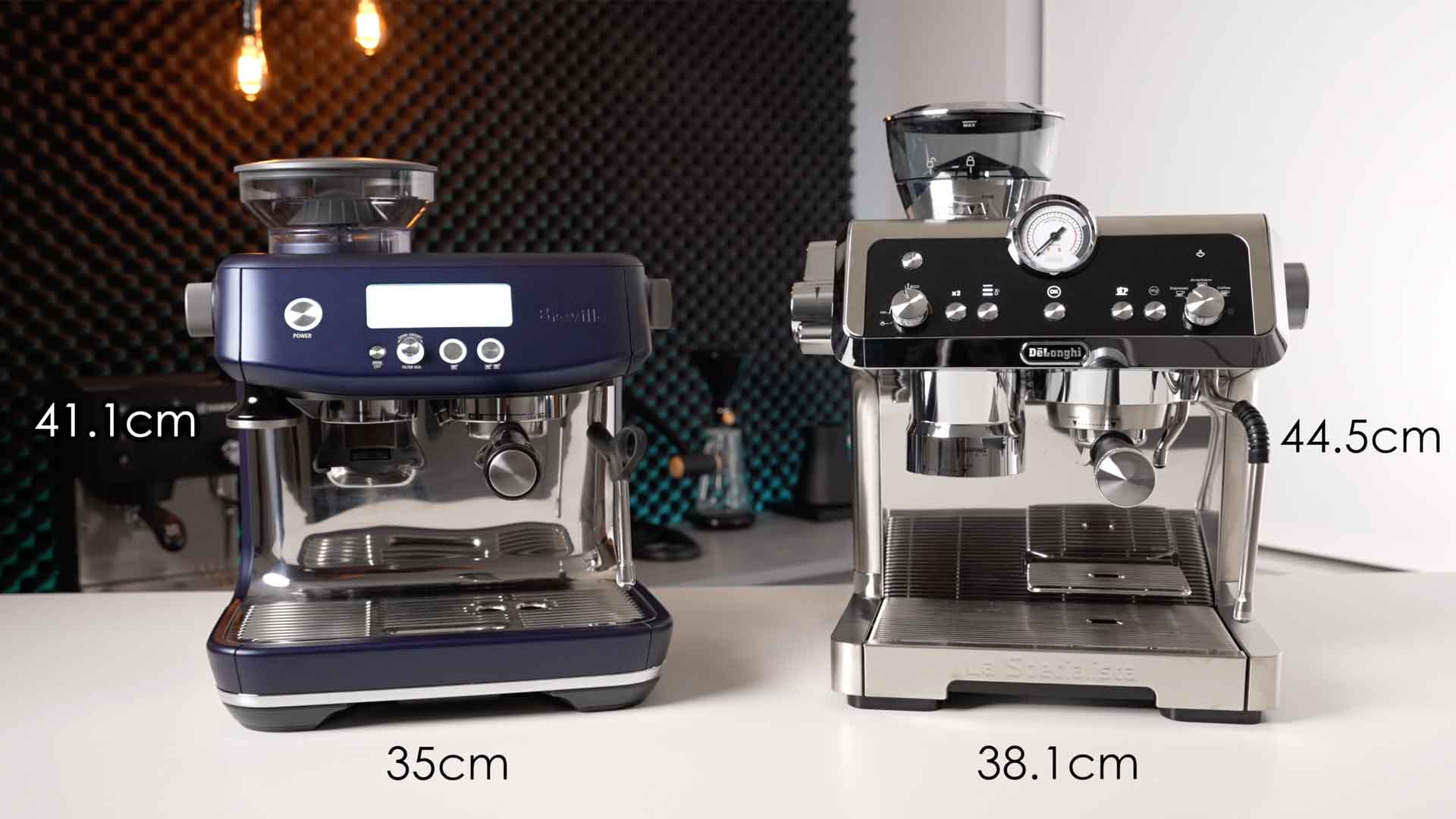 Both machines have a grinding cradle, single group head, hot water spout, and steam arm, but the Delonghi also has a foldable tray for shorter shot glasses, and a built-in tamping station that we’ll get into a little later on.

One final difference I’d like to point out is that the Delonghi has a removable power cable, while the Breville’s can retract into the body, which is a nice touch. 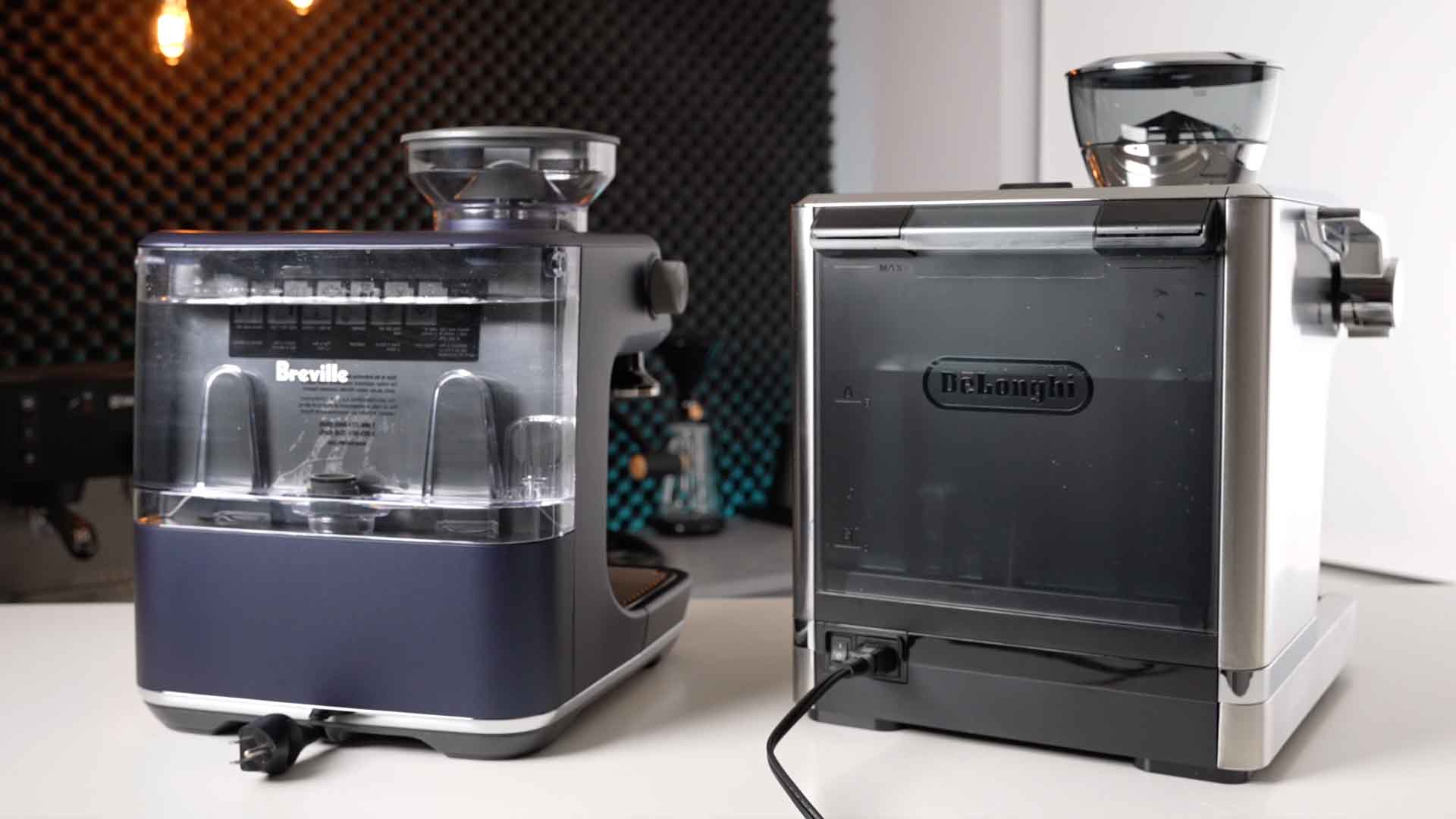 Both of the main bodies are made of metal, with the buttons, knobs, and switches primarily being made of plastic. However, I AM going to give the edge to the Breville in this department. Things like changing the grind setting, starting the grinding, and locking in the portafilter just felt more sturdy and refined.

Another good example of this is in the portafilters themselves. The Delonghi’s feels quite hollow, has a fake chrome end cap, and it’s still doing some odd manipulation of how the flow exits these stubby spouts. Whereas the Breville’s feels more substantial in the hand, has typical real portafilter spouts, and has a stainless steel end cap. 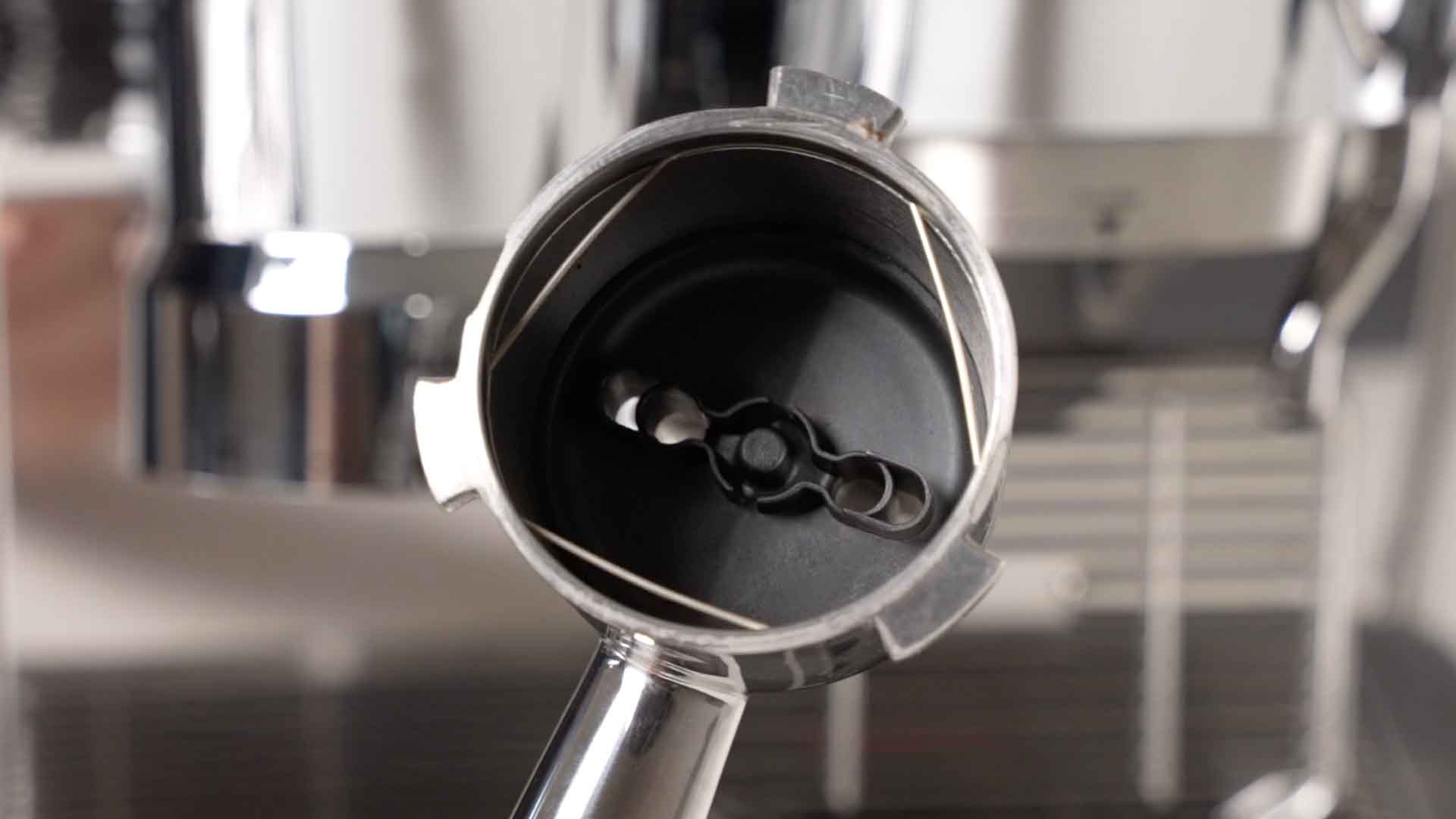 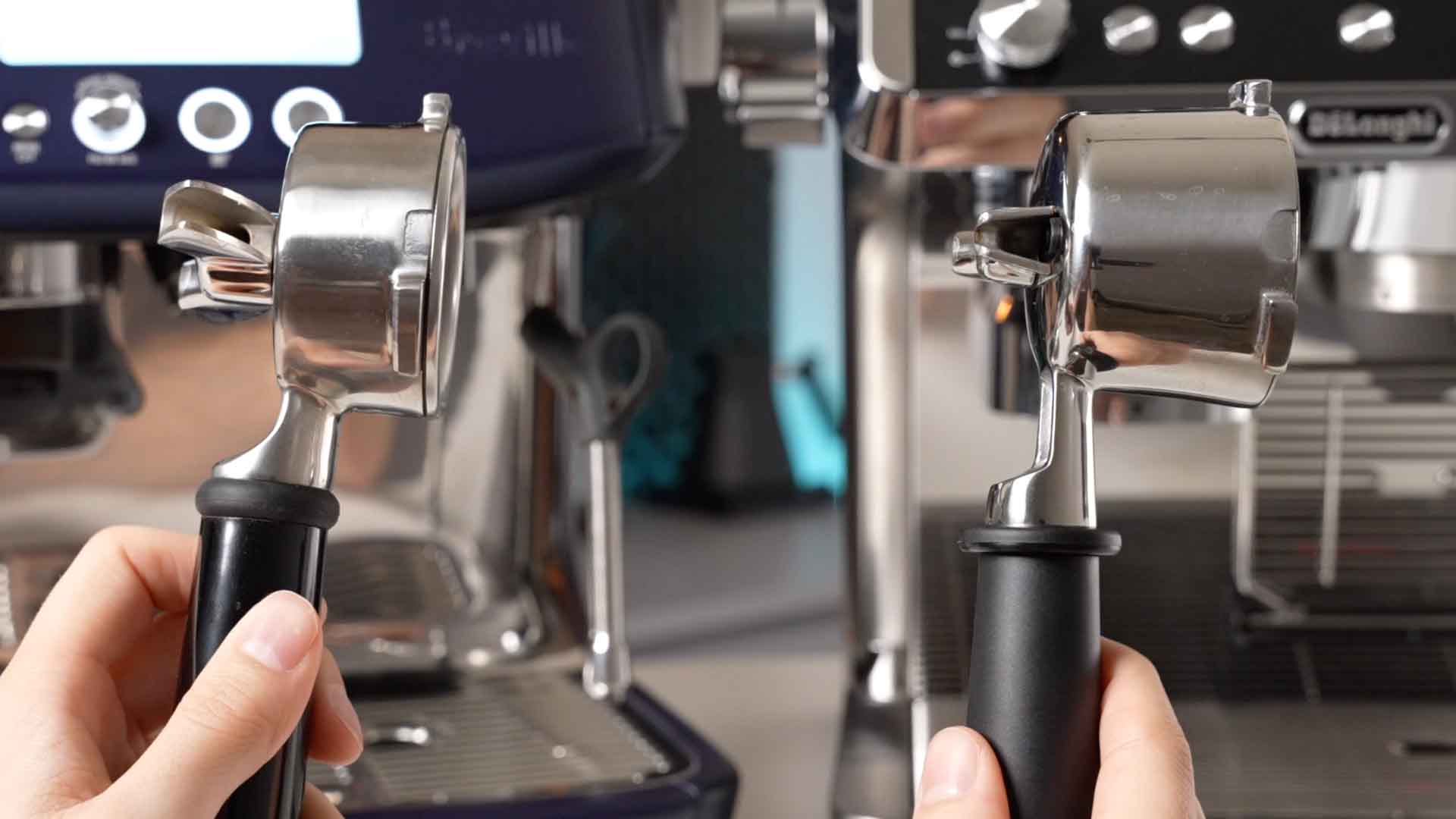 The same can be seen in the filter baskets themselves. The Breville’s feels like a standard filter basket you’d find on any other espresso machine, whereas the Delonghis has a very thin, kind of unusual looking top rim. 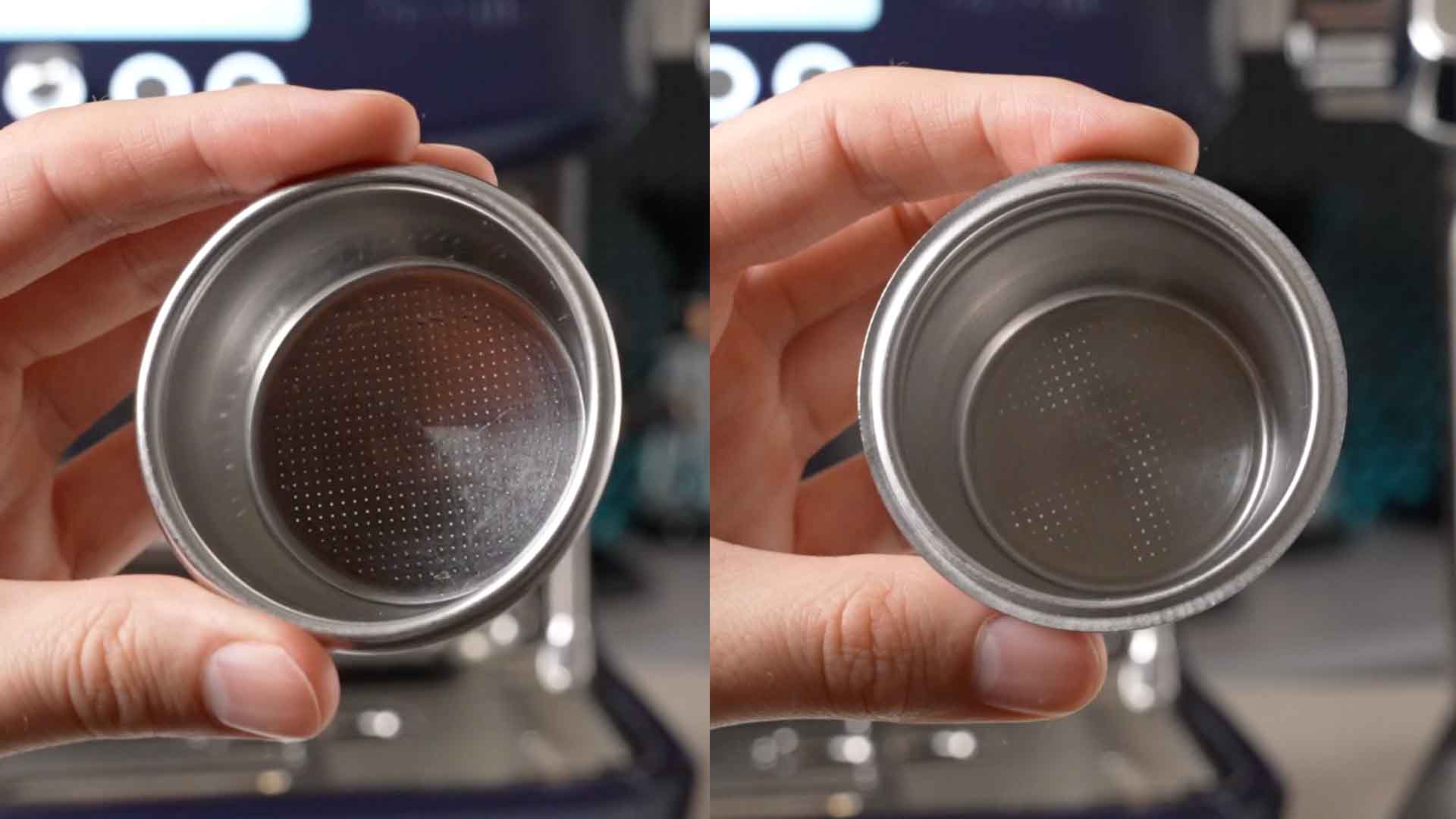 One thing that is in Delonghi’s favour in the quality department is that they’re currently offering a 3 year warranty on these machines. Whereas Breville is only giving 2 years.

Both of these machines warm up incredibly fast. Like, instantly, thanks to the type of heating systems they use. The Barista Pro technically takes only 3 seconds compared to the Delonghi’s 30, but unless you’re just getting hot water for something like tea, you’re still going to need to grind the beans and tamp, so 30 seconds is plenty fast enough.

Speaking of grinding, at least from a workflow perspective, the Delonghi takes a pretty clear win in this area. I have always been a fan of this self-contained grinding cradle and tamper because it almost completely eliminates the mess without any additional accessories. 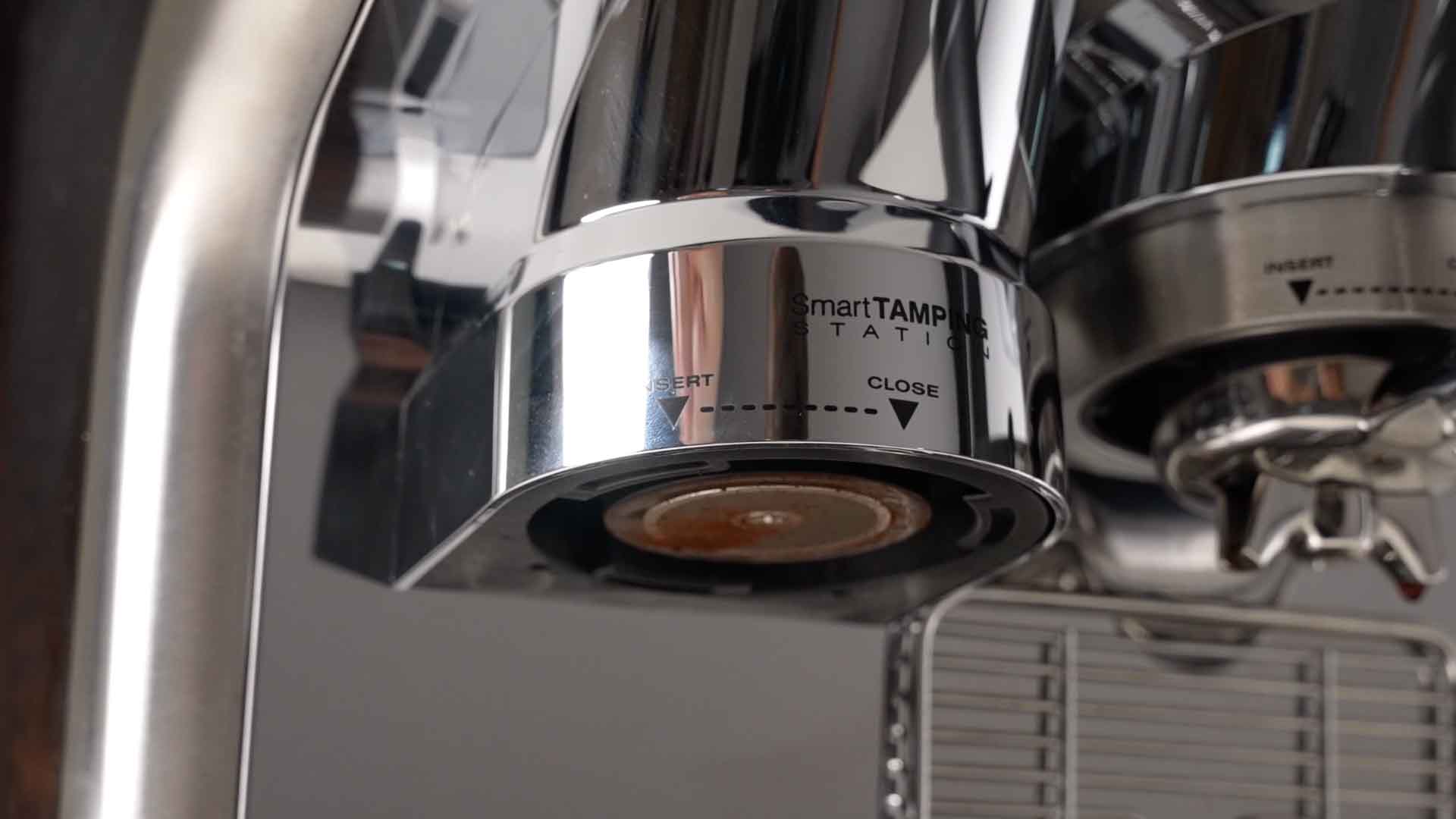 With the Breville, I consider buying either a dosing cup, or dosing funnel to be non-negotiable. Trying to grind straight into the portafilter is just unacceptably messy. 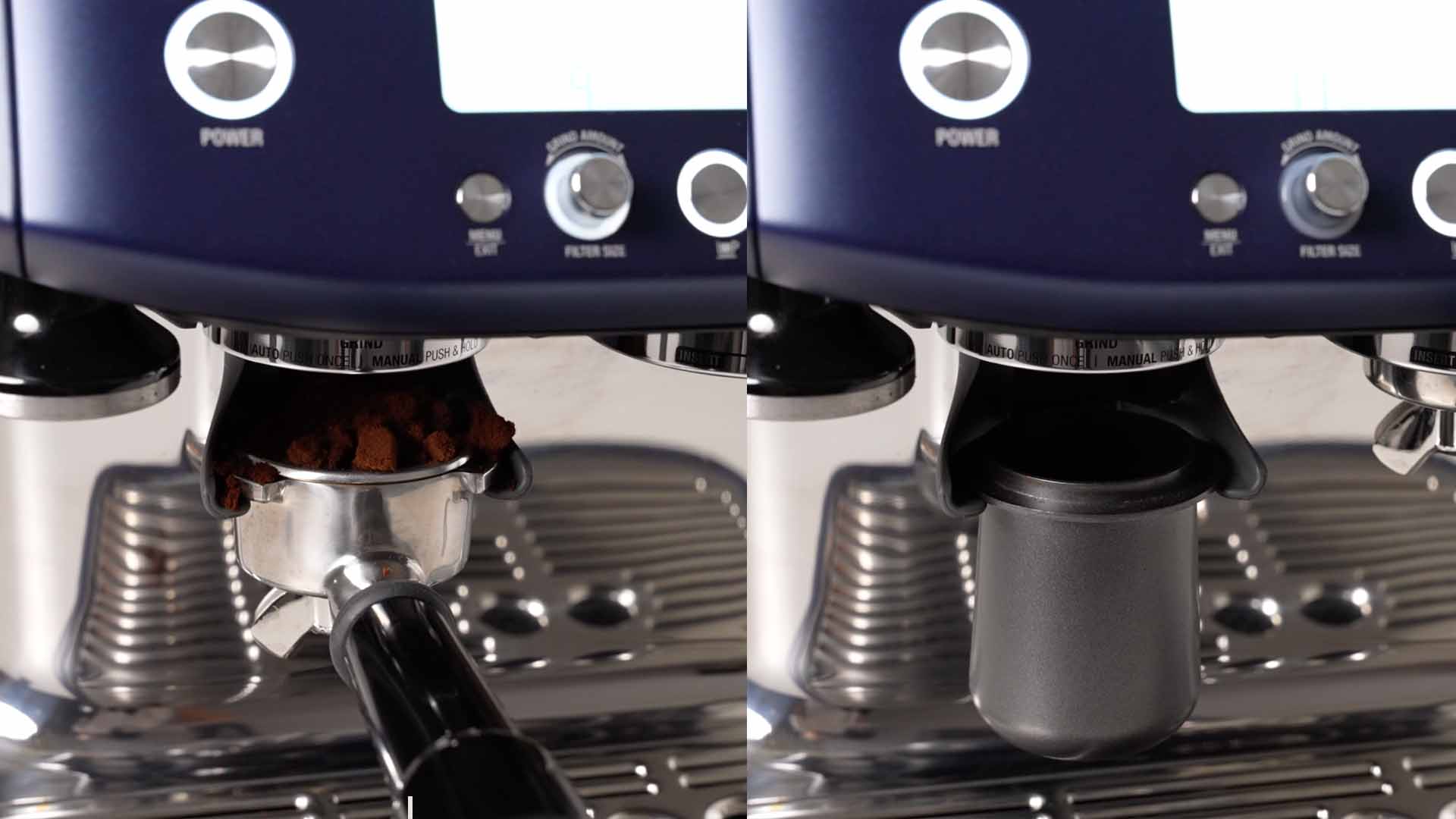 The Prestigio also features what Delonghi is calling “sensor grinding technology”, which not only alerts you when the hopper is getting empty, but also supposedly helps with dosing accuracy. I didn’t think too much of this when I read it on the box, but in practise, I was getting VERY consistent doses from shot to shot. I’d love to hear how this works if someone from Delonghi wants to reach out and explain it to me!

One odd thing I did notice on the Prestigio was the bean hopper. If you want to change beans, say from regular to decaf, there is no good way to do this. Removing the hopper will cause the beans to come pouring out, filling up the mechanism. So you’ll then have to scoop and vacuum out the beans in order to be able to re-attach the hopper. 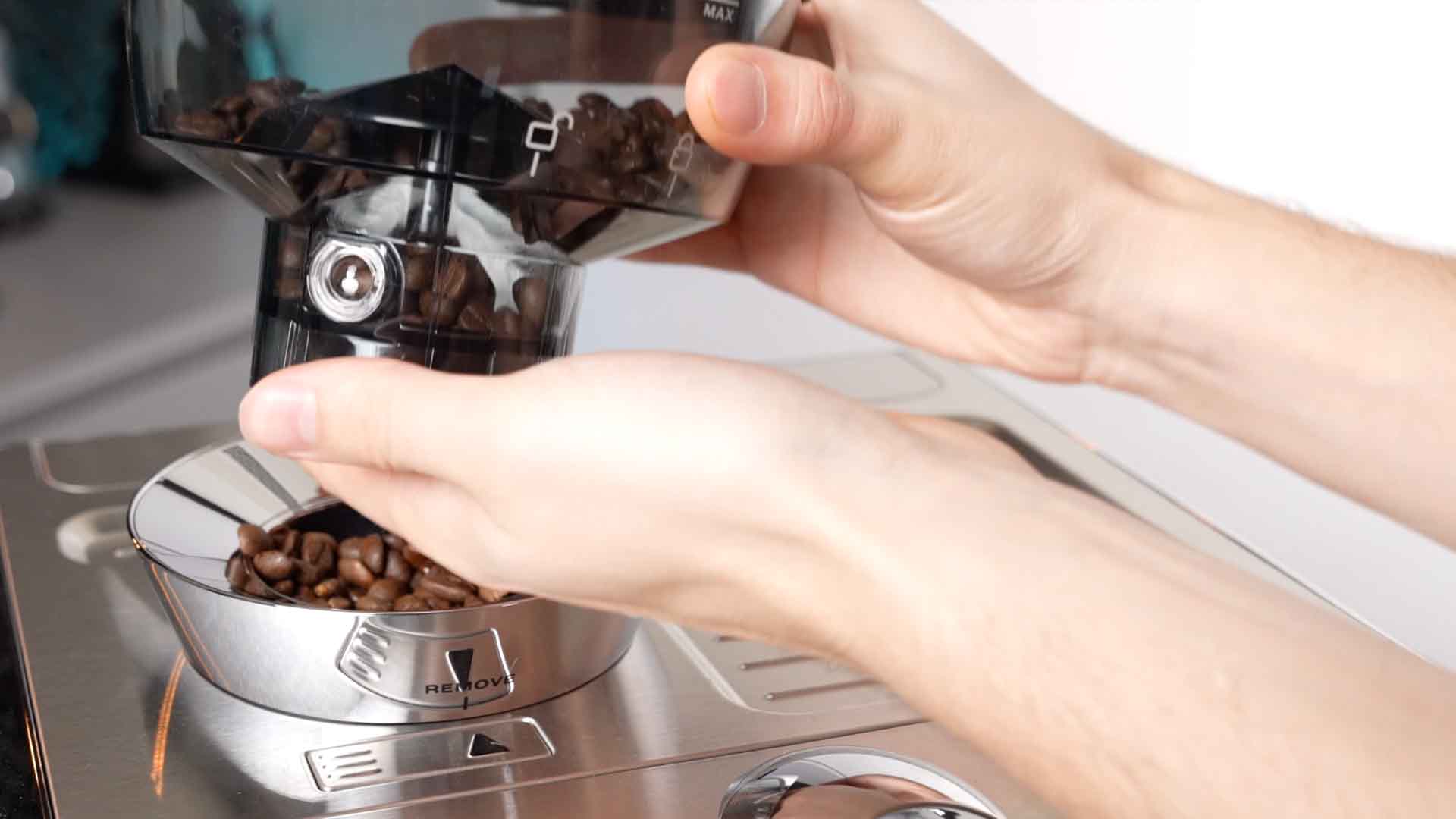 On the Breville (and most other grinders for that matter), the opening gets blocked when you unlock the hopper. So simply twist, lift, and swap out the beans. 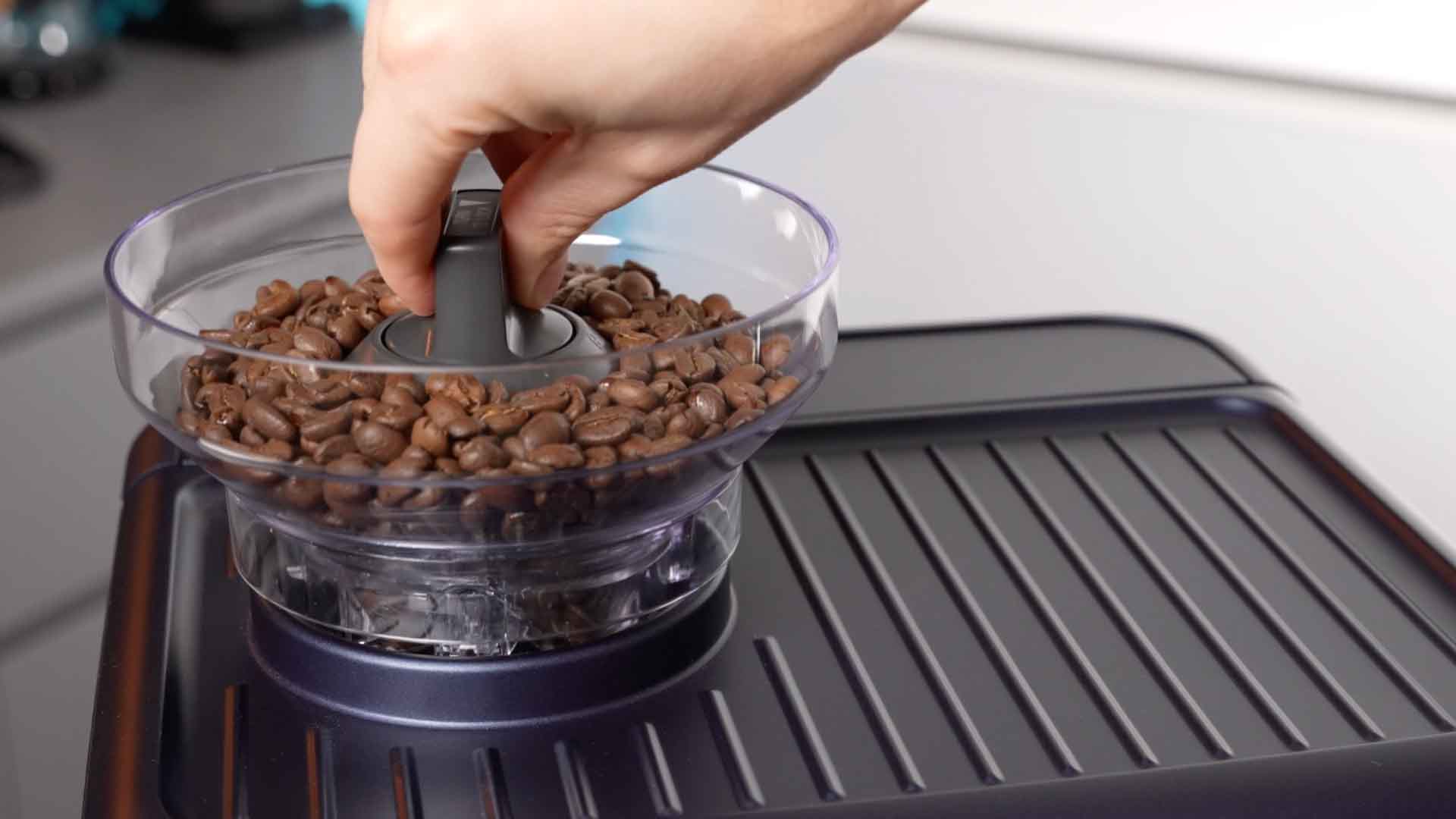 Next we have the user interface itself, where I was honestly quite disappointed to see that Delonghi hasn’t made any changes from the previous La Specialista generations. The buttons and vague icons are simply not intuitive, and you’ll definitely be referring back to the user’s manual on a regular basis for anything other than the most basic of functions. 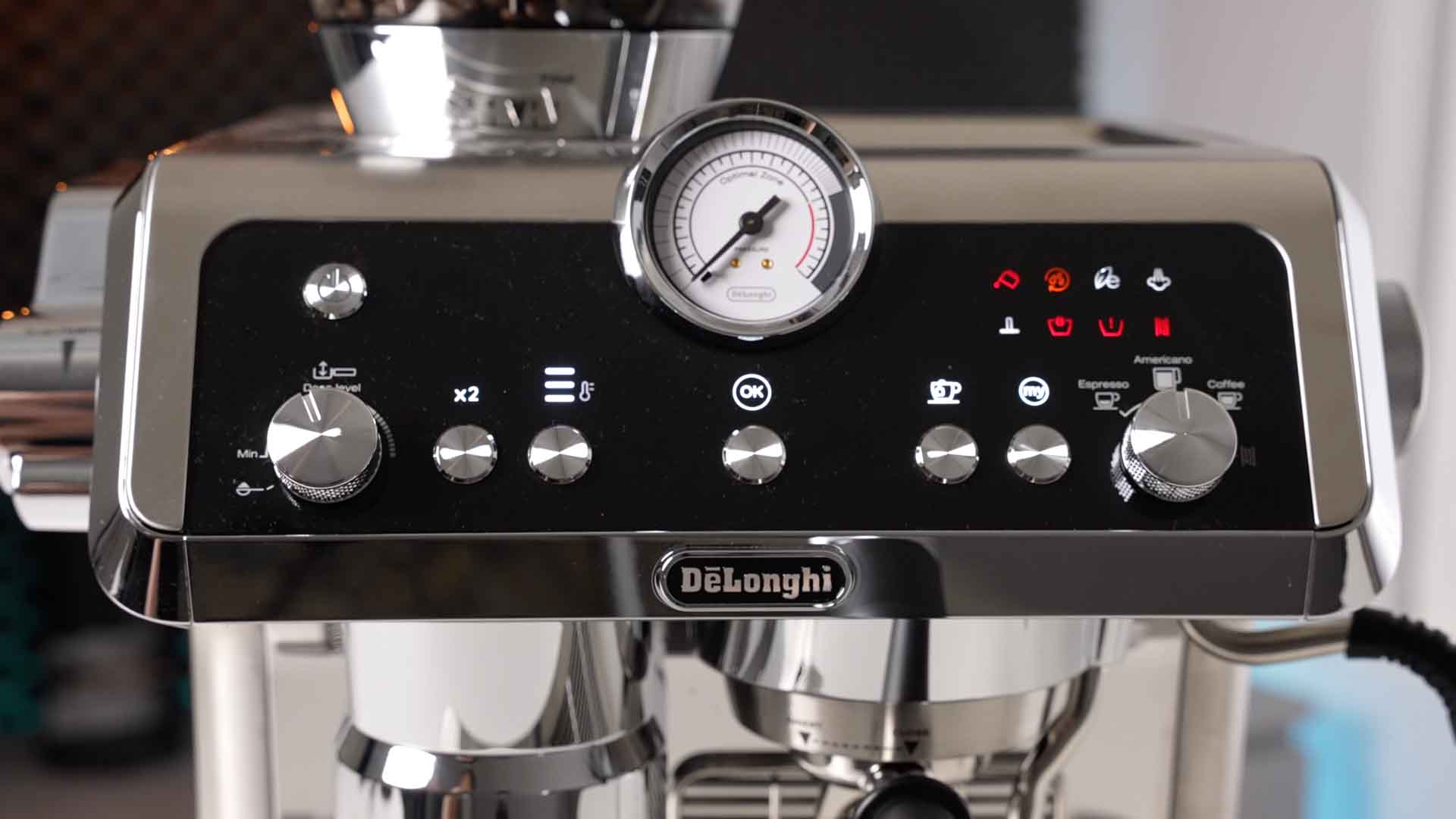 For example, take a look that this page describing how to work the settings menu. 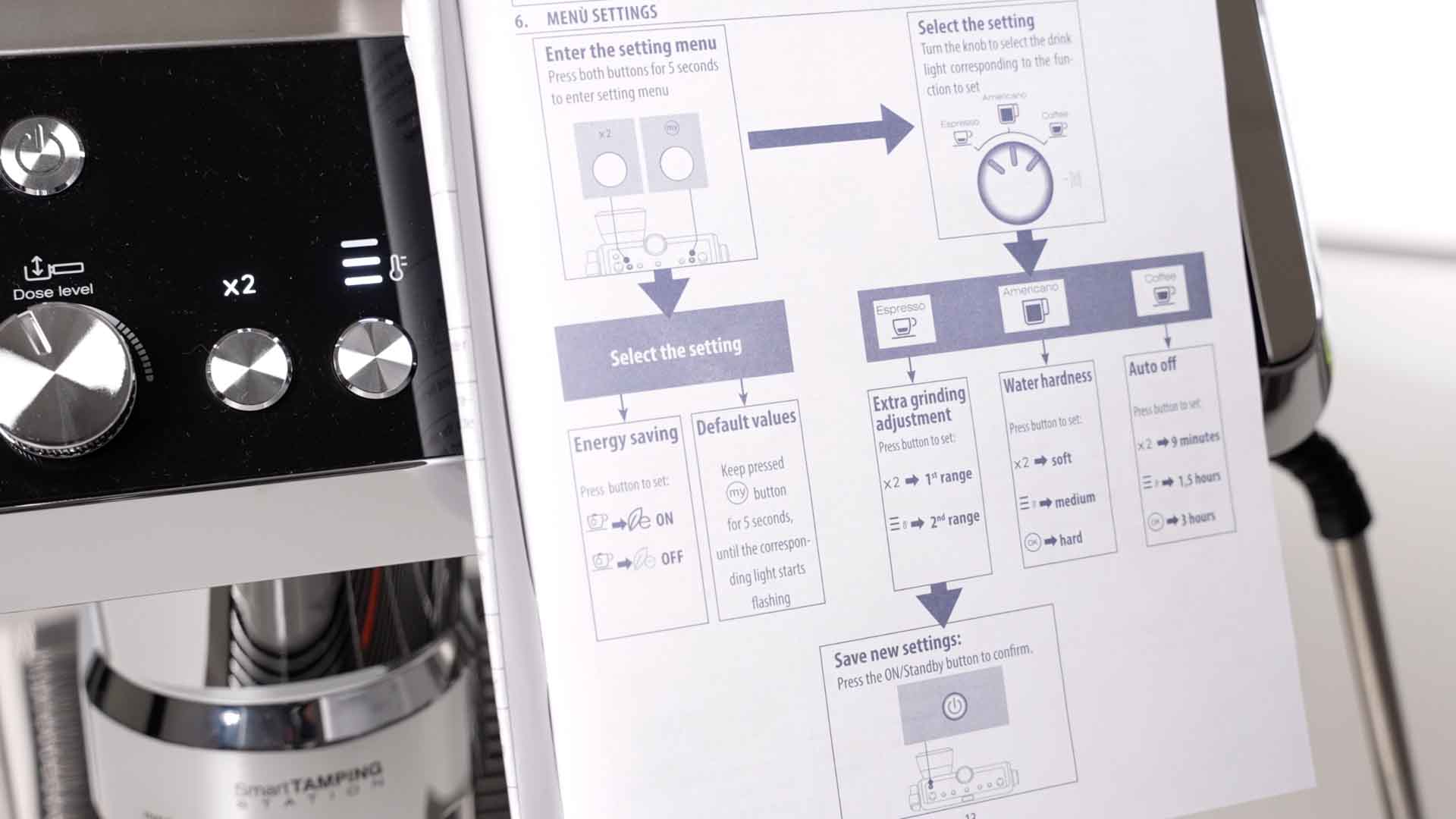 In comparison, the Breville has limited buttons for the main brewing functions you’ll use every day, and the rest of the functionalities are accessed through one dial that controls the display. It will also clearly alert and coach you through any regular maintenance such as cleaning and descaling cycles. 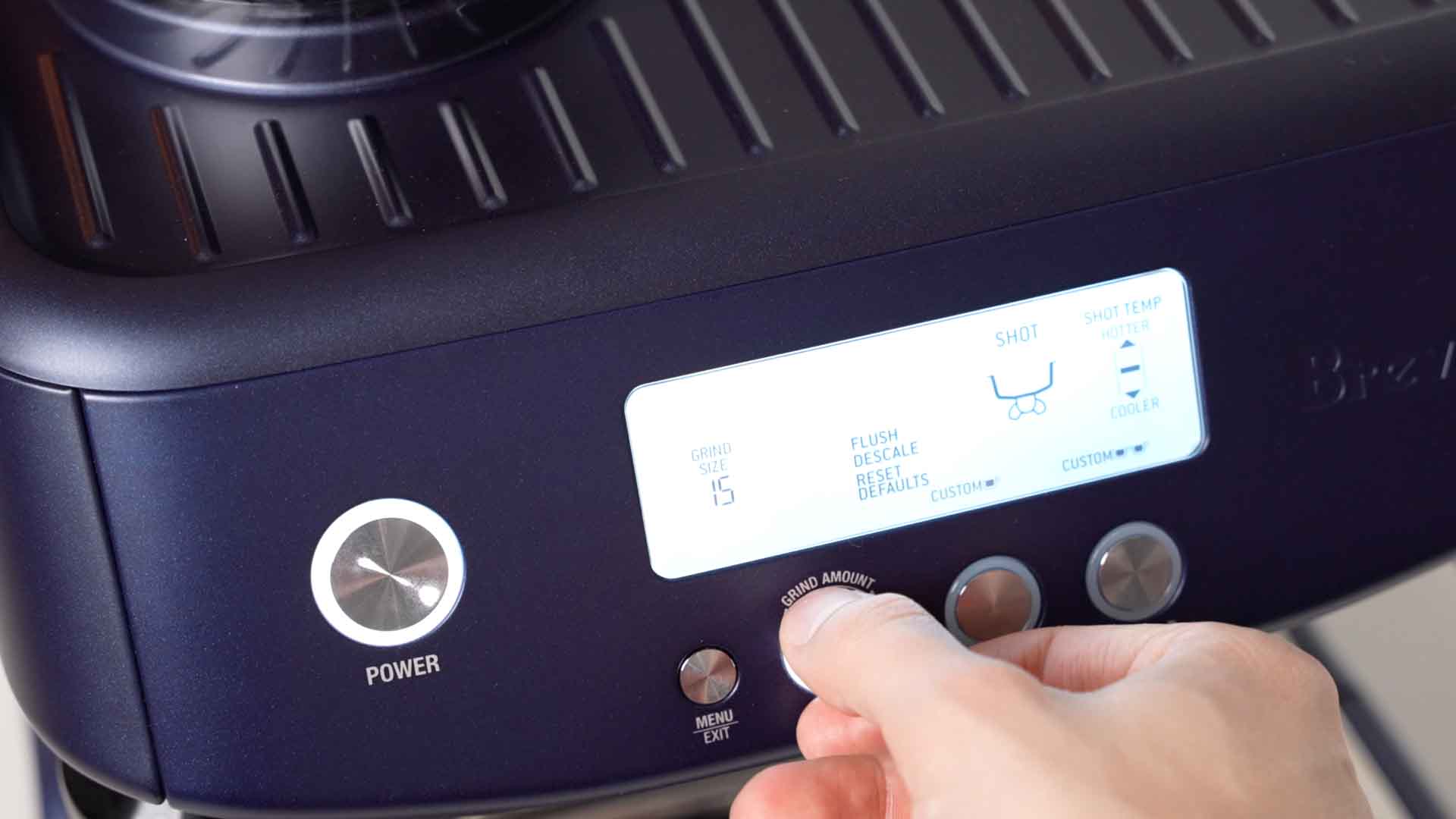 One final advantage that is in favour of the Delonghi is the ability to make drinks with added water with only one button push. Selecting an Americano with pull a shot of espresso, and then dispense the desired amount of water automatically. On the Breville, no such option exists. You’ll need to pull the shot of espresso, and then manually add the water using the hot water knob. I know it sounds like a super small difference, but if this is a drink you make regularly, the automatic recipe really is a nice feature to have. 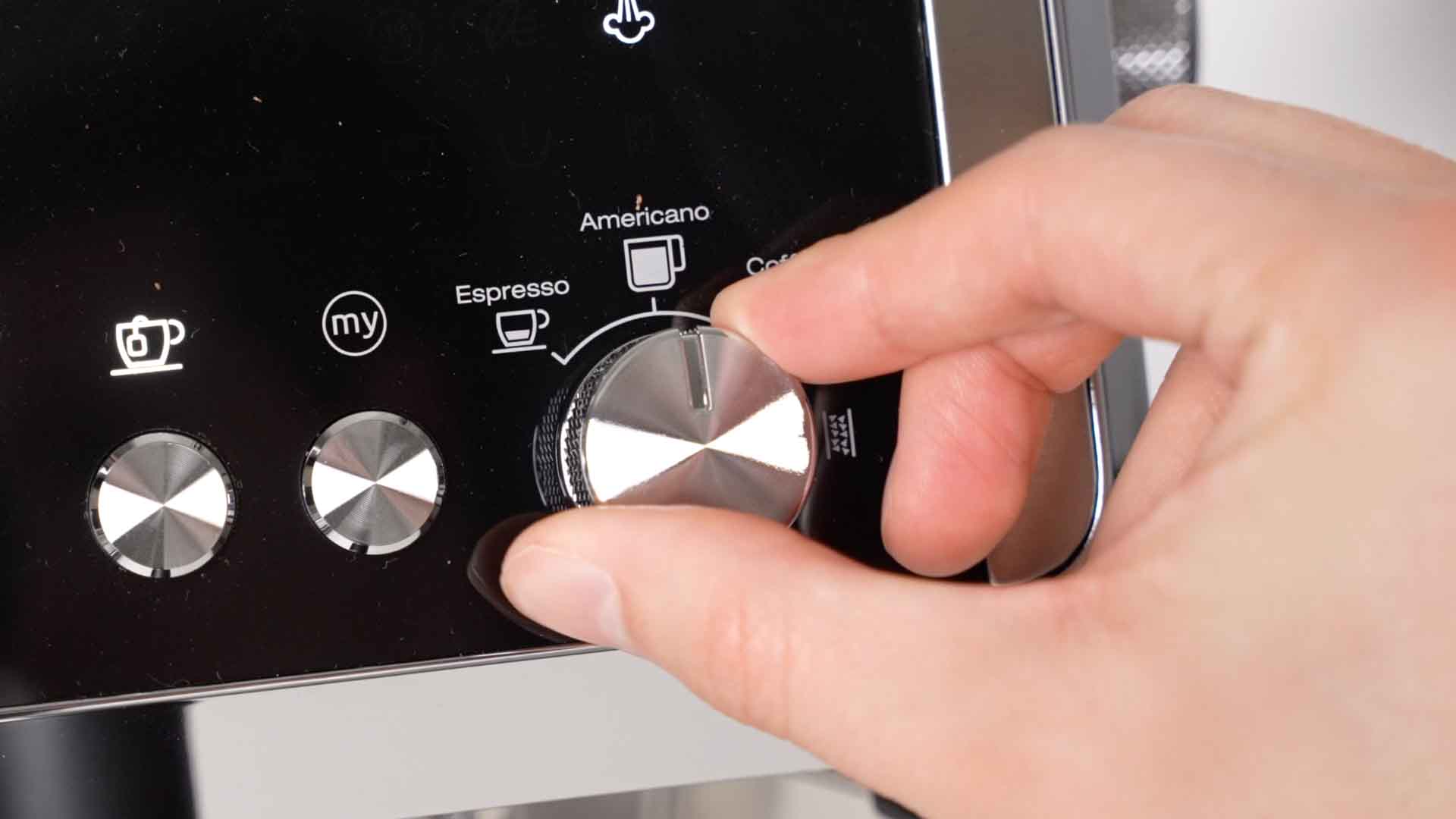 As you can tell, from a user experience standpoint this one ends in a bit of a draw. You’ll have to determine which of the items mentioned are more important to you.

This bring us to the most important stuff, the actual espresso and drink making performance. And there’s a lot to unpack here so buckle in. With the Prestigio, Delonghi has transitioned the La Specialista range to using non-pressurized, or “single wall” traditional espresso filter baskets. Which is a move I am 100% in favour of, and is something that is honestly a necessity if you’re charging as much as they are for this machine.

The first thing that concerned me about this switch is that they didn’t change the built-in grinder to go along with it. It still only has 8 stepped adjustments. 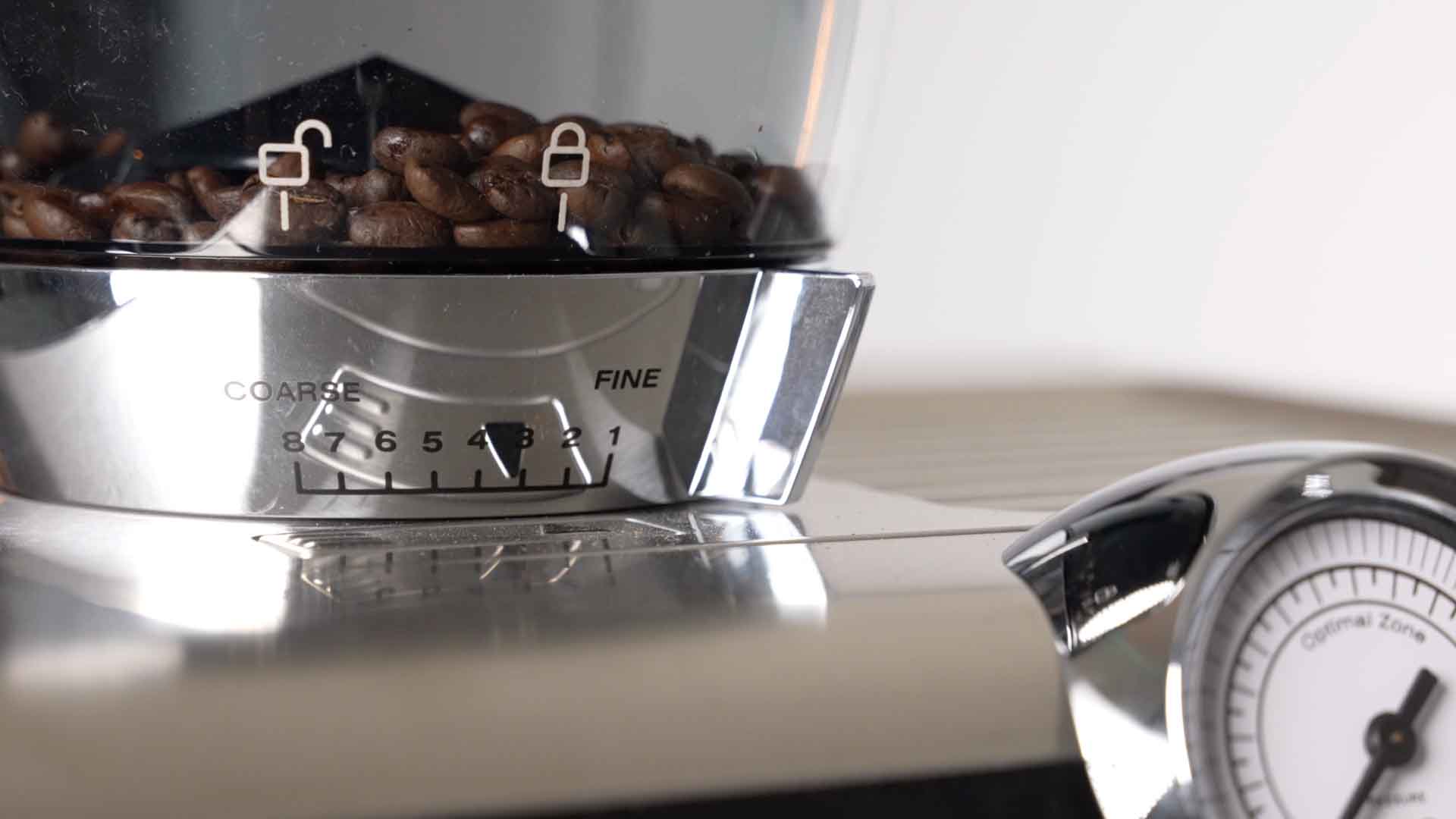 Dialing in espresso takes very small changes, and compared to the 57 total different grind sizes you can achieve between the internal and external adjustments on the Barista Pro, and you can see my reason for concern here.

The second thing that starts to come into effect with non-pressurized baskets is having good puck prep. And that grinding and tamping chute I like so much is not exactly conducive to that. After the grinder has stopped, you have no opportunity to re-distribute the grinds before tamping, which can lead to a hugely uneven puck, and therefore uneven flow. 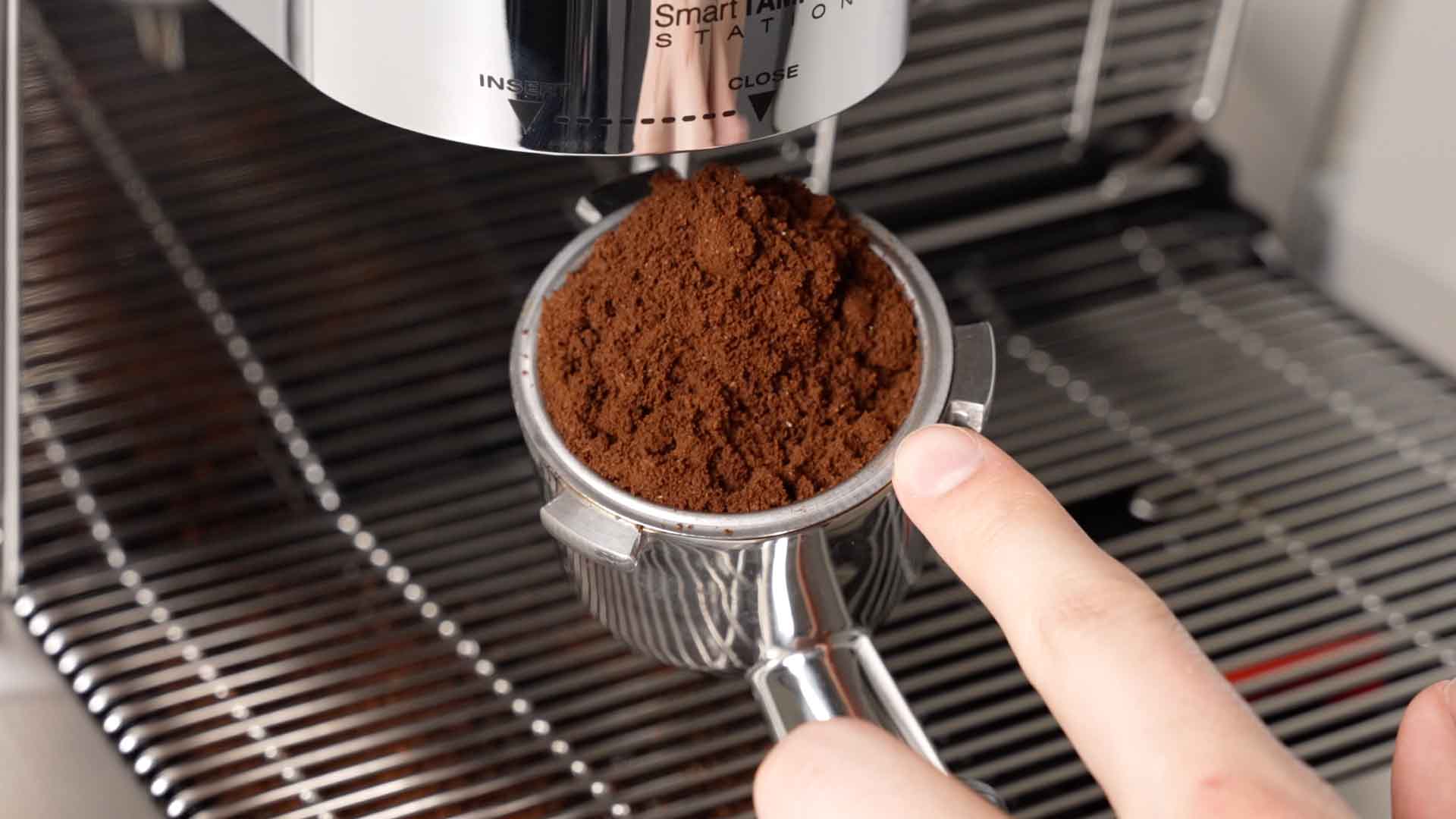 When tamping right away, the shots came out tasting similar to a pressurized portafilter shot. Okay tasting, but slightly watery, with extractions only sitting around the 16% mark.

The workaround for this is to grind, remove the portafilter, redistribute, turn off the machine so that it doesn’t try to grind another dose when you put the portafilter back in, and then tamp. Or, you could buy and aftermarket tamper. With this workaround to allow for better puck prep, I was able to edge the extraction up by another percent to around 17%, which is approaching a somewhat respectable range. 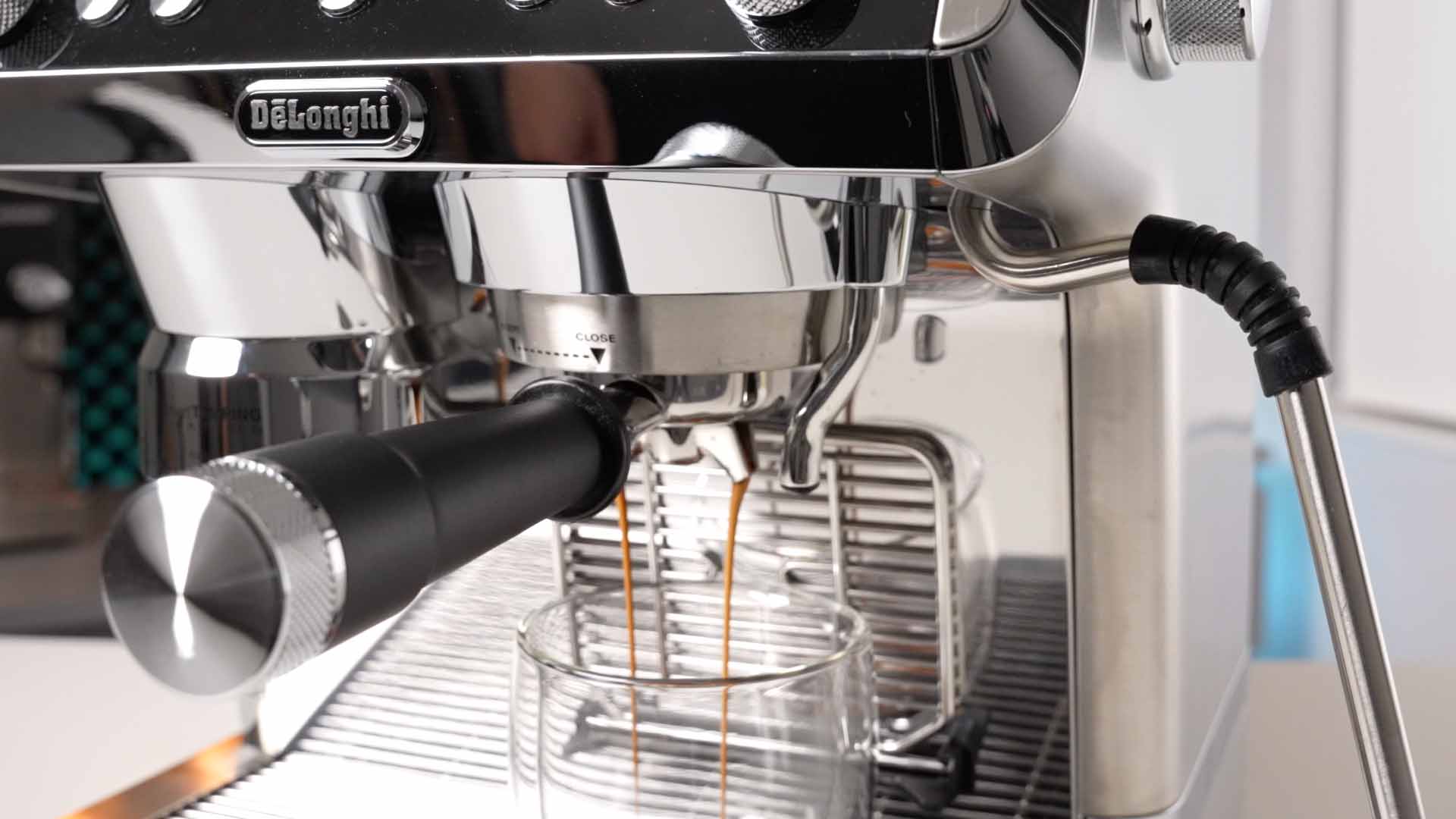 However, this is still significantly lower than the 18.5% I was able to achieve with the Barista Pro. 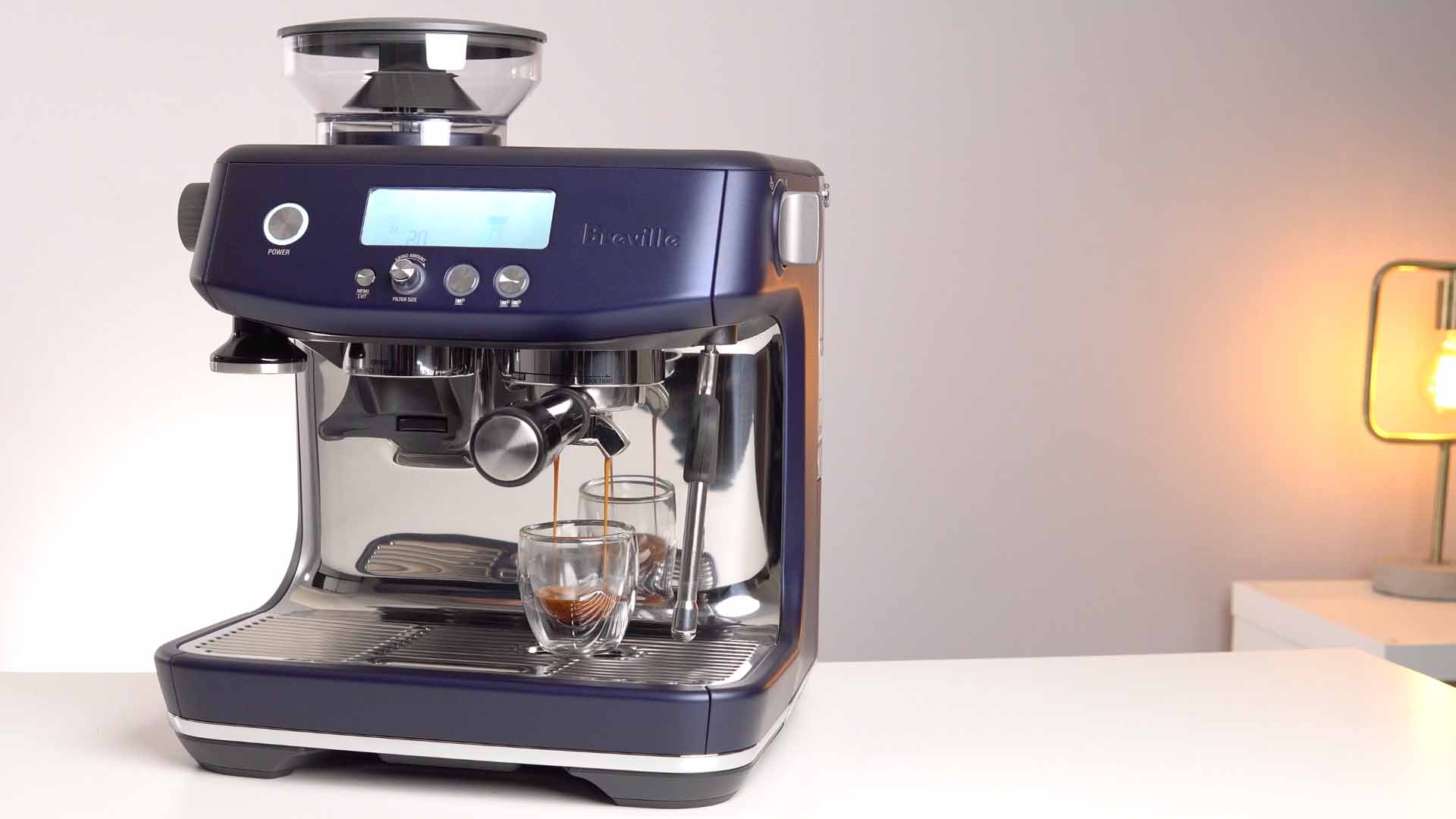 And I think that there are a few reasons for this. 1. The Barista Pro uses a slightly larger 54mm filter basket 2. I was able to dial the grind in more accurately and 3. The Barista Pro runs at a traditional 9 bar at the group head. All of these things lend to more even flow, and higher extractions. 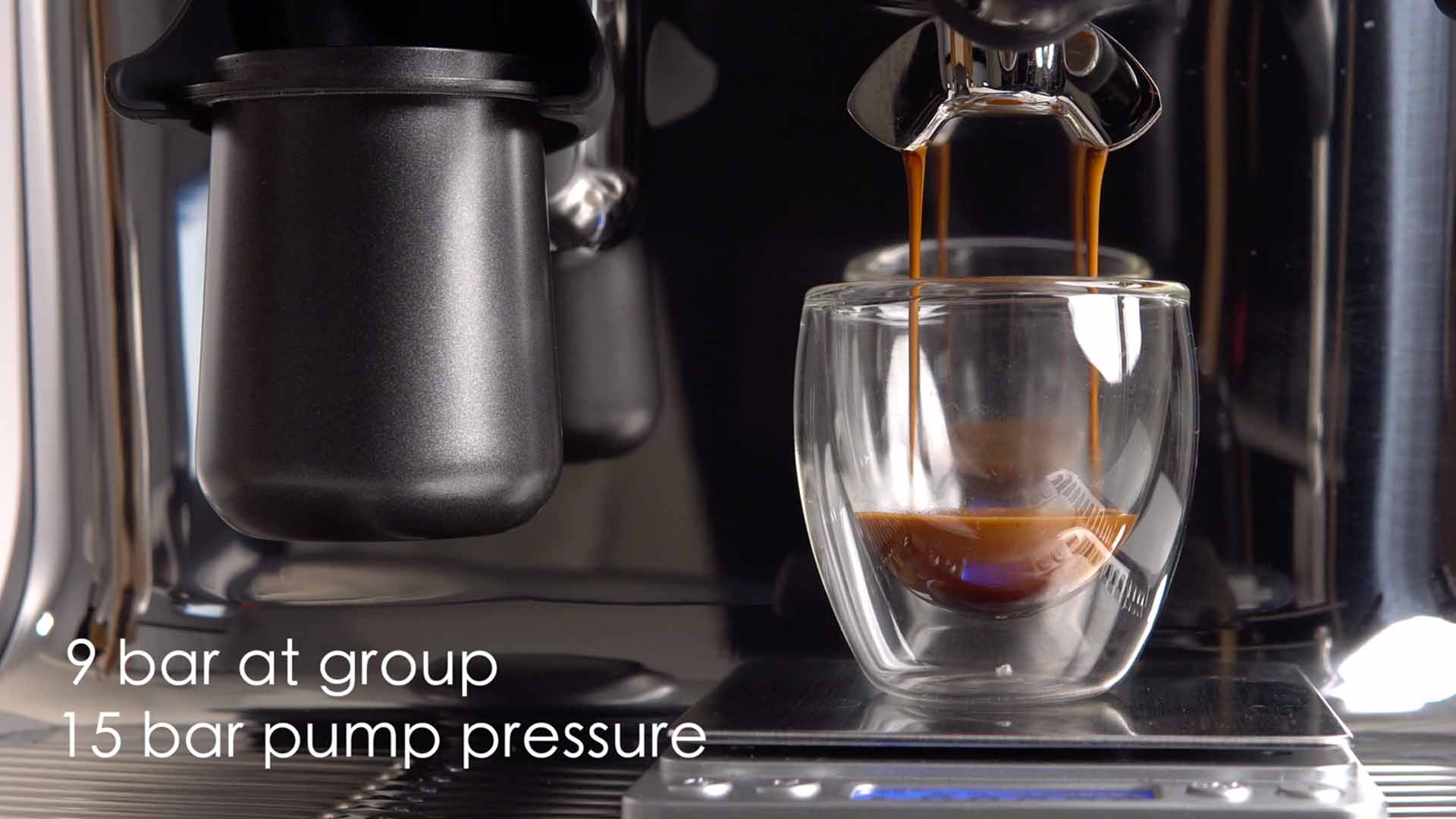 What does this mean for taste? It means that the Barista Pro is able to produce balanced, full-bodied shots of espresso with a variety of different beans. While the Prestigio trails slightly behind in terms of shot quality, and is really best suited to medium and dark roasts due to the limited grinding range.

Moving on to the milk steaming capabilities, these are both impressive machines in that they have virtually no wait time between brewing and steaming, like you get on most traditional single boilers. After brewing, both machines switch in a matter of seconds to producing steam. 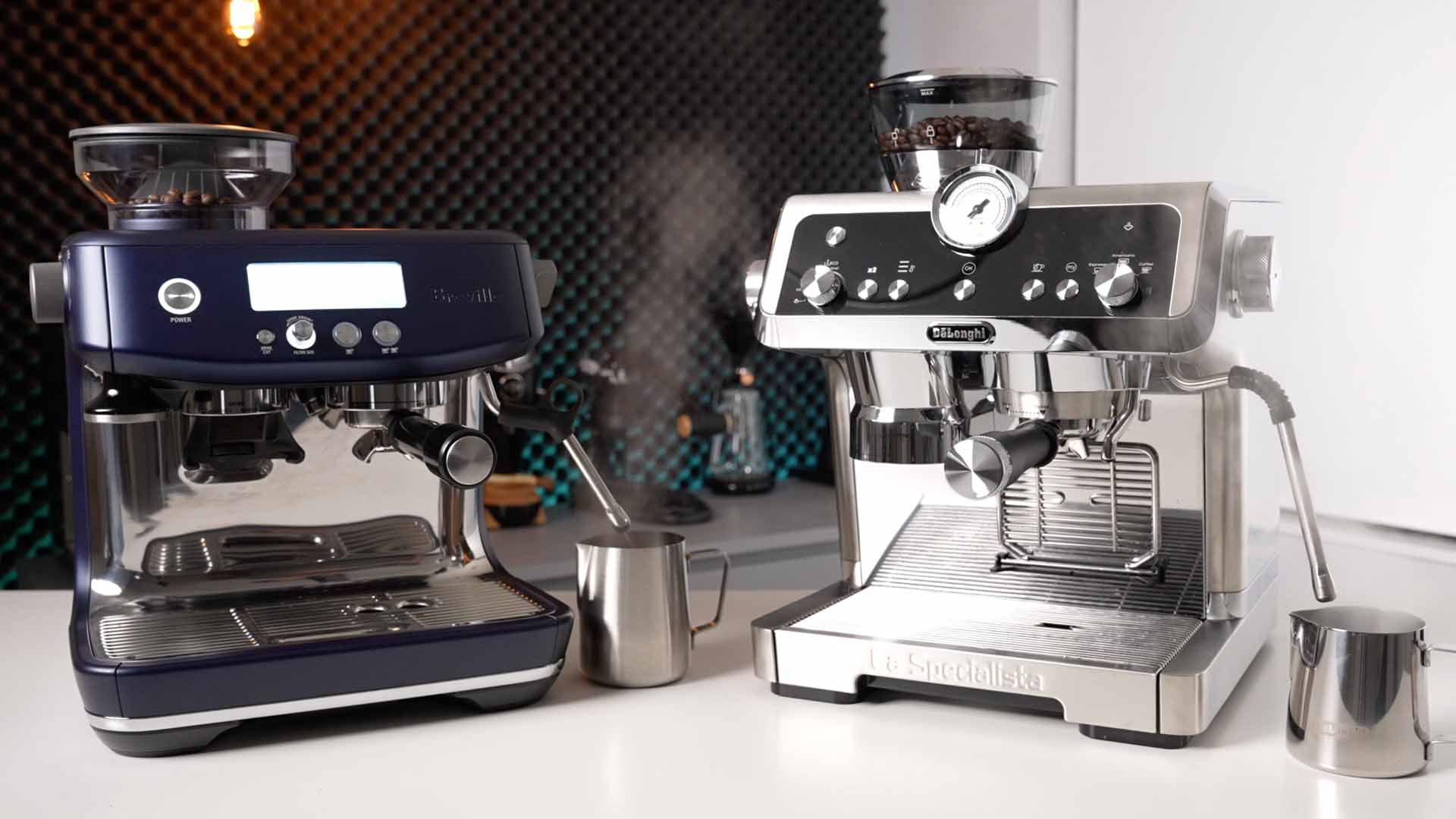 In terms of power, the Breville was significantly quicker, taking only 35 seconds to steam up to 60 degrees celcius, versus the 55 seconds it took to accomplish the same task on the Delonghi.

Both steam arms are on ball joints, but the Delonghi’s is still quite restricted in its movement compared to the Breville. I actually wasn’t able to achieve the nice 45 degree angle which you often hear recommended for milk texturing. 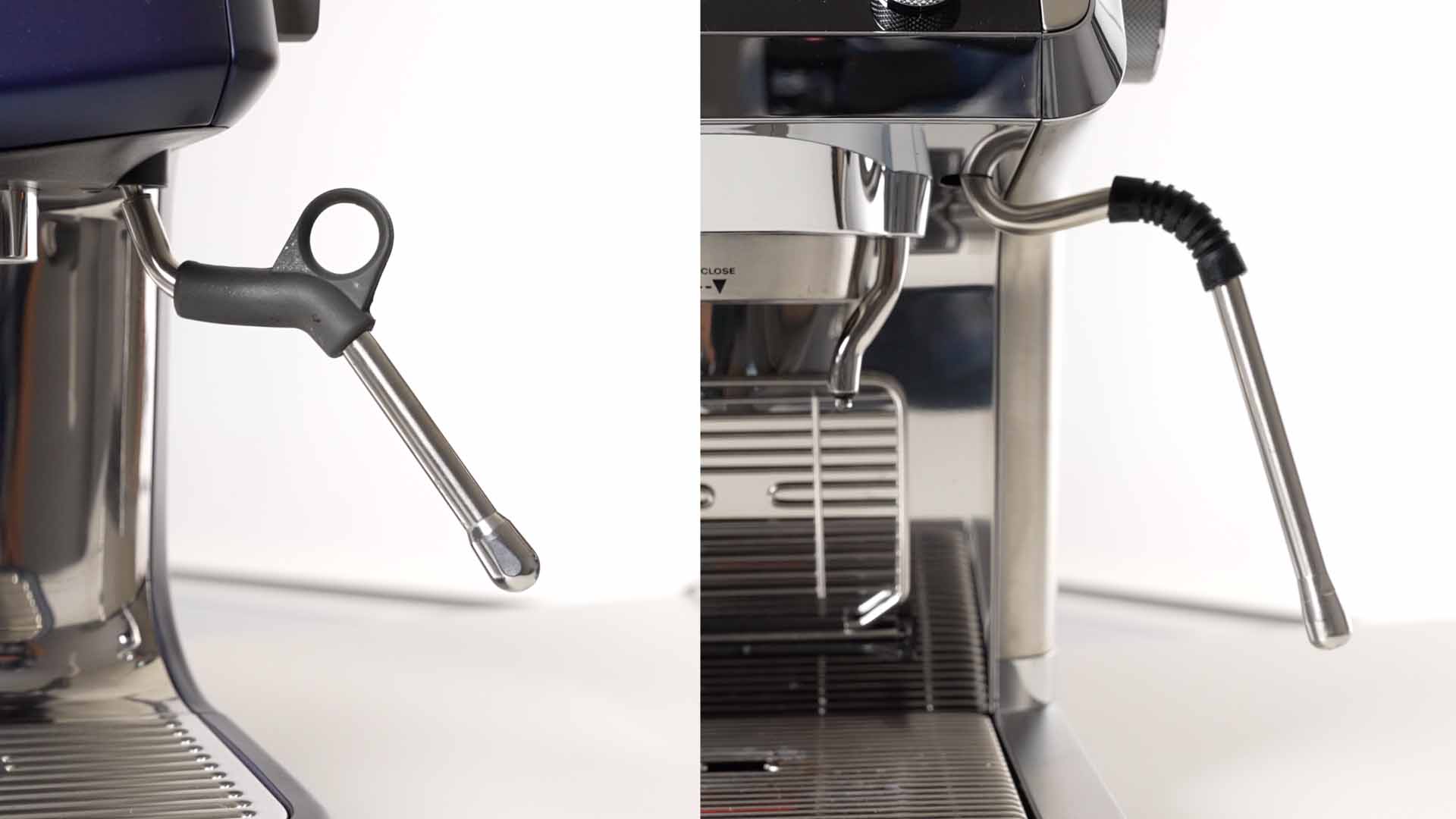 So after all that, where does this leave us, and which machine should you buy?

I think that the Delonghi La Specialista Prestigio has some seriously clever features, such as the sensor grinding technology, dynamic pre-infusion, and built-in tamping. However, I think there are still some basic oversights that stop it from being a GREAT machine. Not being able to remove the hopper without spilling beans everywhere, a somewhat confusing user interface, not being able to redistribute the grinds before tamping, only having 8 grind steps with non-pressurized baskets… these things combine to make a user experience that leaves something to be desired, and more importantly coffee quality that trails noticeably behind the Breville.

I do WISH that the Breville had some of the features from the Prestigio, but in what matters most, espresso quality, fine-tuned adjustability, steaming power, quality feel, and intuitiveness, the Barista Pro is still the all-in-one machine to beat in this price range.