Baratza is a very well-known name in the home coffee grinder space, and we’ve seen them once on the channel already back when we looked at the Sette lineup. Today, we’re taking a look at the Vario W+, an update on the original Vario, and with a few added tricks up it’s sleeve. Could it be the perfect grinder for you? Let’s find out. 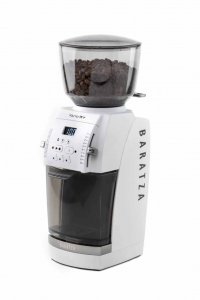 Starting off with the build quality and design, the Vario is a simple and unassuming design that could fit into a wide variety of kitchen styles. It’s available in black or white finishes, and comes with a 230g capacity hopper which can also be replaced with a single dosing option. There is a light within the grinding area that is supposedly to help you ensure no grounds get left behind, but I think that it mostly just looks cool…

In terms of build quality, the Vario isn’t the MOST inspiring build. Not in such a way that I’d be concerned for longevity, in fact on the new Vario+ refresh they’ve further improved the build of the internal mechanism and grind chamber.

What’s still slightly uninspiring to me is the plastic that does remain on the outer shell, and the wobbly grind size adjustments. The Vario+ is inching its way out of entry-level territory with its price point, especially this W variant, and I think that Baratza need to start finding a way to make their products feel a little more premium as the home grinder market starts to become more crowded.

Vario grinders have long been known as grinders that can achieve great grind quality AFTER a few modifications. The Vario W+ really does away with that by moving to an all-metal grinding chamber, and including an upgraded burr set right from the start.

Like I said, I’m borrowing this grinder, and in exchange I sent away my Mahlkonig X54, which was a grinder I was really enjoying for pour over and higher-clarity espresso shots. When I got the Vario W+, I was equally happy with the brews I was getting, and after looking a little closer, this isn’t necessarily very surprising. The new 54mm steel burrs now included in the Vario W+ are very similar to those found in the X54. NOT identical, as you can see in this side-by-side, but they do produce very similar flavour profiles.

With that being considered, the Vario W+ is represents a great option in terms of value to grind quality ratio. If you’re looking for a multipurpose grinder, this is going to be a tough option to beat purely from that perspective. Flavours are clear and pronounced, with good sweetness, but not SUCH a narrow grind distribution that would stop you from also using it for espresso. There are cleaner burrs out there, but these sit in a nice sweet spot, and I have no trouble recommending this grinder on grind quality alone.

However, if you DON’T need the ability to brew espresso, you could get even more bang for your buck by going with something like the Fellow ODE with SSP burrs. This will not only give you better pour-over cups if you’re a clarity fanatic, but it’s also a good bit cheaper even with the burr upgrade…

Moving onto the user experience is where the Baratza could lose some points, OR it could further confirm that it’s the perfect grinder for you, depending on your desired workflow.

Grind adjustments use a macro and micro adjustment that provide a total of 220 possible grind steps, and although some will be quick to jump on the fact that it isn’t stepless, I can assure you that the micro adjustments are MORE than subtle enough to properly dial in.

The Vario W+ integrates a scale under the grinding chamber to make consistent and carefree dosing an absolute breeze. People who love this system, LOVE this system, and for good reason. It’s able to measure not only the weight, but also takes into account the grinding rate so that after a few doses, it learns to stop the burrs early so that the final weight lands almost PERFECTLY on the number every time. If you’re using a full-sized hopper and brewing for pour-over, this is simply one of the best workflows around.

For single dosing, things are a little different. From a retention standpoint the Vario actually performs surprisingly well, never retaining more than 0.5g from my tests, and on average landing in the 0.2-0.3g range. Perfectly acceptable.

The trouble with single dosing on the W+ is the weighing system. If it ever detects that the weight on the platform isn’t increasing, it shuts off the grinder. So, you can’t let it run to get out the last half gram or so out. This is the same reason that the W+ doesn’t come with an included portafilter holder, it wouldn’t work. This decision by Baratza clearly shows their intention for this to be a brew targeted, and hopper-fed workflow, but I think they’ve unnecessarily shoehorned themselves into a smaller box than necessary by doing this on what is otherwise a very versatile grinder.

The workaround for this is to override the scale completely, which you can look up how to do in the users-manual, but I’m not sure why they wouldn’t just have this as a direct button on the interface…

The Baratza Vario W+ is a great update the ever-popular Vario line. They’ve seen the most popular modifications users were doing to their grinders, and now give them to your straight from the factory in the form of a great burr set, and a much improved metal grinding chamber.

Overall, the Vario W+ keeps up its reputation as a grinder that outperforms its asking price, but not without one or two quirks along the way.