Today we’ll be looking at an update to the ever-popular Fellow ODE brew grinder. We were lucky enough to receive an early press unit of the ODE Gen 2 from Fellow, and let me tell you, although it looks similar, they’ve made some significant improvements over the original ODE. 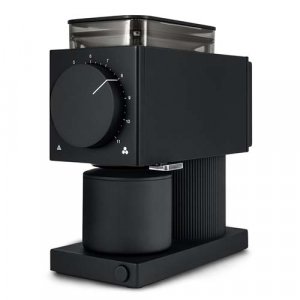 The Mess is Gone!

Probably my biggest workflow concern with the original ODE was that it had a tendency to be a quite messy grinder. Even with RDT, some grinds would always find their way out of the catch cup onto my counter.

I am VERY happy to report that this has been completely fixed on the new ODE Gen 2. They’ve integrated an ionizer right at the exit of the grind chute that does a fantastic job of eliminating static. Even without RDT, the ODE is now one of the cleanest grinders I own. A complete 180, and reason enough on its own to opt for the newer version.

Visually, the ODE Gen 2 is almost identical to the original ODE, but one thing you can notice is a slightly larger and steeper hopper. The capacity has been increased to 100g, and the magnetic catch cup as also been ever so slightly enlarged to match.

Another subtle change is that the funnel on the Gen 2 is slightly steeper, which helps avoid beans getting stuck like could sometimes happen on the earlier version.

Now for the REALLY good stuff, along with the nice workflow upgrades, Fellow have also upgraded the most important part of any grinder, the Burrs.

I wasn’t a huge fan of the original ODE burrs, mostly because they couldn’t grind fine enough for my liking, and the flavor profile I was getting always leaned slightly towards a harsh acidity.

The new Gen 2 Brew burrs are MUCH more balanced, providing better sweetness, and still enough clarity to satisfy those who love to pick out tasting notes.

Equally as important, they can now also grind finer. The grinder still uses a 31 step dial, but the finest grind you’re able to achieve is significantly finer, and more than you’ll need for any immersion or percolation style brew.

Can it brew espresso now?

The Fellow ODE was never designed as an espresso grinder. Even though the new burrs could probably grind fine enough if re-zeroed manually, the motor is simply not designed for that kind of workload and you will be voiding the warranty. (although I’m not sure how Fellow could ever prove you were grinding for espresso…)

So, is it worth upgrading to this new grinder?

If you already own a Gen 1 ODE, it will really just depend on how much you value the added cleanliness and larger hopper on the Gen 2. If the answer is not at all, then you might as well just purchase the Gen 2 burrs on their own, and install them on your existing grinder.

However, if you’re shopping new, then it really in a no-brainer. The Gen 2 Fellow ODE is a much more well-rounded package with these upgrades, and is quite honestly the way it should have been at launch! At this price point, it’s a very tough brew grinder to beat.