After years of not giving these much attention, I finally gave into my curiosity and bought one Ember Mug 2, and one Ember Travel Mug 2 to see if this expensive hi-tech drinkware brand lives up to the hype. Are the prices justified? Let’s find out.

I’m going to talk about these two products completely separately, because I have VERY different opinions on them individually despite them both being from the same brand. 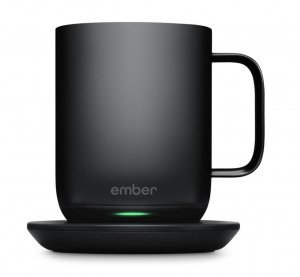 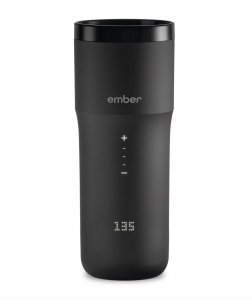 Starting with the mug, the first thing I was curious to see is does it FEEL premium, or is it just a cheap feeling mug with tech built in.

And once unboxed, I was left pretty satisfied. The mug has really solid weight to it, it has a rubber base, and the main part of the cup is stainless steel with a ceramic coating. No part of it felt plasticky or cheap, and having the weight from the battery and heater in the base was actually really nice, because having a bottom-heavy mug makes it tougher to accidentally tip over when placed on soft surfaces like a couch.

Moving on to the main selling point of Ember products, let’s talk about the tech. The mug will automatically detect when liquid is added, and then maintain a standard temperature of 57 degrees Celcius. If you want to adjust this, which you probably will, you’ll need to download an app, which is always a negative in my books.

I would much prefer if there was a way to do this on the Mug itself, like there is on the Travel version.

However, once I DID download the app, things were very easy. You can choose a colour for the light which will briefly glow when you pick it up so you can identify whose cup is whose, and you can also adjust the temperature in 0.5 degree increments which was a process that I found really interesting. I realized that my IDEAL temperature was a pretty narrow window, somewhere between 58 and 60 degrees.

The app has some built in suggested temperatures for different kinds of drinks, which I didn’t pay much attention to, but it also has some tea steeping recipes which I thought was a pretty good idea.

Can it boil water?

The tea steeping recipes also got me thinking. Can you FULLY heat water with these? Say if you’re in a dorm at college that doesn’t allow kettles. And the answer is YES, but it’s gonna take you about 40 minutes on the Mug and 25 minutes on the Travel Mug. Not to mention, you’ll have to leave it on the charger to avoid completely draining the battery.

Speaking of battery, my mug was getting right around the advertised lifespan of 1.5 hours, even despite me having my temperature slightly higher than “average”. But this is at room temperature, and I was really curious to see how it would perform outside, say, on a crisp 0 degree Canadian Morning? And with this I was really surprised. It still lasted almost an hour which is far more than I expected for a completely open mug.

Is it worth it?

This brings us to the big question, is it worth it? I can’t really believe I’m saying this, but YES!

However, I think this will vary depending on how and why you typically drink warm drinks. I don’t really drink coffee and tea for the caffeine, I got into this hobby because of the routine of sitting down to listen to some music and relax with a warm drink. It’s probably the favourite part of my day. And for this purpose I was really surprised at how much MORE enjoyable the Ember made things.

I’m going to try not to romanticize this too much, but like I said earlier, I realized that my IDEAL temperature window was pretty narrow, and typically once my drink gets past that I just start drinking it faster to avoid it going completely cold.

With the Ember, every single sip was perfect. And what this meant was that I ended up taking much longer to enjoy my coffee. Like an hour longer. I didn’t feel pressure to keep going back to it, I just took a sip when I felt like it, and stopped when I got to the bottom. Which is another good thing. Zero cold coffee has been wasted going down the drain since I got this mug.

So do I recommend the Ember Mug? Yes. Is it very expensive? Also yes. But this means that it makes a great gift for someone who you know would never buy it on their own. Or for yourself if this is a part of your daily routine that you really really look forward to.

This brings us to the Ember TRAVEL Mug 2. This product, I have a slightly different opinion of.

Starting off again with the build quality, this just feels like any ordinary travel mug, or in the case of the lid, maybe even slightly CHEAPER. Which isn’t a good thing, when you realize these cost another 50% MORE than the regular Ember Mug.

But this could have maybe been forgiven, if the performance was mind blowingly, life changingly awesome.

Starting at 63 degrees, after only an hour and a half the Ember is at a lukewarm 41 degrees, only 10 degrees better than just a cup sitting out in the open. The cheap travel mug? Still over 60 degrees!

But Matt, the Ember Travel Mug has a heater! True. And if you’re planning to drink your drink within the 3 hour battery life, then you can ignore everything I just said.

But it just seems like a very inefficient way to take a hot drink with you. Have a terribly insulated thermos, and rely on the battery and heater to keep it up to temperature. And what if you want another coffee in the afternoon once the battery is dead? This is a TRAVEL mug, are they really expecting you to sit by an outlet for 2 hours in order to have a second warm drink? And what if you want to use it to keep something cold? It doesn’t have a cooling system…

Final Word on the Travel Mug 2

I guess the moral of the story is, that if you want to treat this as an actual travel mug, it’s really not a good option. Anything over 3 hours, or anything more than a couple drinks a day and you’d be better served with one of these. If you’re just going to use it on the charger at a desk, or maybe your office has a rule about open mugs, then maybe I can see a use case for this? But it just doesn’t seem worth it….

Which is a shame! Can you image how long the battery could last on this if it was actually well insulated? It could go for DAYS! Not hours, and would be an absolute power house. But in its current form, even with the fancy lights, I just can’t possibly recommend you spend your money on this.

So, after years of trying to ignore Ember products, I can say that this has sort of backfired because I’ve really been missing out on using the basic Ember Mug 2 to improve and EXTEND my daily coffee routine. I really like this product.

The Ember Travel Mug 2, missed the mark for me, especially given the even HIGHER price tag. But if in the future they improve on the basics of how it’s insulated, I can maybe see myself shelling out the money for one of those too.