The Breville Barista Express was undeniably one of the most popular beginner all in one espresso machines since the day it was released. And now, Breville have given it a long over-due upgrade in the form of this, the Barista Express IMPRESS. It has some pretty clever features, but also has me a little bit confused with some decisions… stay tuned to find out why! 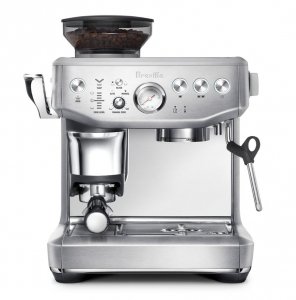 Espresso machines with built in grinders are a seemingly dying breed. Personally, I still find this to be a hugely underserved part of the home espresso market, as beginners often look for a compact, all-in-one espresso solution without the drink quality sacrifices associated with super automatic machines.

Breville continues to lead this built in grinder segment with an iron fist, and because of that, hasn’t necessarily felt too much pressure to refresh their design language.

The new Barista Express Impress is a perfect example of that. Although they’ve packed in a new tamping system, the overall design and shell are effectively identical to the older model. Love it or hate it, they’re not going anywhere fast, but I’m sure many people will be relieved to see that the analog pressure gauge is here to stay.

In terms of build quality, the story is much the same. The machine feels solid, it has a metal outer shell, and the plastic that is used is not thin and brittle feeling, but the same thicker more premium feeling material they seem to use throughout the lineup.

One difference is now the inclusion of a tamping handle, which I am happy to report they made out of metal, as it is a high frequency touchpoint. But on the flip side, the cover of the new tamping system is plastic fake chrome, which is a bit of a let down.

Other than that, there is the same large removable water reservoir, hot water outlet, single hole steam arm, and convenient storage compartment behind the drip tray.

Day to day user experience is by far the biggest place where the Impress differentiates itself from the base Barista Express, and really all other machines in their lineup.

Espresso puck prep can be a daunting task for beginner baristas. How much do I dose, how hard do I tamp, am I tamping flat, why is my dose changing when I change the grind setting…. The Impress is looking to fix these frustrations, by taking care of that part of the process in a clever way.

You insert the portafilter, grind your beans straight in, and then pull down on the lever to tamp. The machine will then look at the depth of the tamp, and determine whether that was the right amount of grounds or not based on the tamping depth. If there isn’t enough, it will prompt you to grind again, and the check again.

Now, this might seem like a tedious process, and it is, but you only have to do it once. After that, the machine remembers how much it ground previously, and adjusts the next dose accordingly, meaning that next time, it’s a simple as grind, tamp, and go.

Just like the first time I used an integrated tamper, I was once again very surprised by just how much this improves workflow. The process really isn’t any different than the excellent but prohibitively expensive Breville Oracle, which also tamps for you.

This system comes in a very close second, and really is the easiest home espresso machine I’ve used in a very long time. For beginners, this is a no brainer system, that will almost certainly save Breville from some “frustration returns” that they probably see on the more manual models like the Barista Pro.

Now, workflow is one thing, and we’ve seen that the Barista Express Impress has it in spades, but what about the actual espresso quality?

When you introduce an automatic step into a workflow, there can be a sacrifice of quality for that convenience, and this was a big concern of mine. Because you are tamping immediately after grinding, there is no opportunity to redistribute or even out the grounds, a critical step in puck preparation.

In practise, however, it just didn’t seem to matter all that much… I really wanted to make fun of this as a big oversight on Breville’s part. But it seems that the large dose this aims for, combined with undersized 54mm portafilter, allows this system to be less sensitive to having perfect grind distribution.

I didn’t have any issues with shot consistency or visible channeling throughout my testing, which left me a little perplexed, but in a good way.

Still, I do want to dock Breville some points for not even making distribution an option for those who might want it. You physically cannot remove the portafilter from the cradle before tamping, otherwise you’ll spill grounds absolutely everywhere.

Other than the considerations from the tamping process, the Barista Express Impress is a well appointed espresso machine.

It has 25 grind steps, which is more than the base Express, allowing you to dial in more accurately. It has the ability to adjust brewing temperature, program in two shot sizes, or extract manually. And, it runs at a traditional 9 bars at the group head which is a great thing to see in a machine at this level.

Many manufacturers try to trick consumers with high pressure figures, but don’t be fooled. When using a single wall filter basket and grinding fresh, anything above 9 bars is actually a negative because it will start to cause channels and be difficult to get consistent shots. Higher numbers are not better when it comes to espresso pressure.

Finally, let’s quickly touch on how much the automatic tamper is actually dosing. In my tests it generally wanted to give me around 19g once dialed in. This value will change slightly depending on if you grind coarser or finer.

At the same grind setting, the dosing was impressive consistent from shot to shot, not varying more than 0.5g. If you have a particular dose in mind, you can also tell the machine to manually dose, using a timed dose adjustment on the side, which is a good option for those who want a little bit more control when aiming for a specific brew recipe.

Probably the biggest shock for me when it came to the new Impress was the fact that Breville has stuck with their older, slower heating system.

You won’t really notice this for espresso brewing, but when it comes to steaming, the drastically slower transition and steaming speed can definitely be felt. The Barista Express was a slow steamer, and this updated version is not any better…

Steaming one drink will take you around 75 seconds once the machine gets up to temperature.

One ADVANTAGE of this, if you can say that, is that it can be easier for beginners to practice their technique on a less powerful machine and a single hole steam tip.

However, overall I can’t help feeling a little disappointed that this machine didn’t receive new and much faster thermojet seen on the Barista Pro. If you’re making only one or two drinks at a time, this won’t be a big issue, but trying to serve more than that back-to-back on this machine will become a time consuming task.

So with a mix of excellent workflow, good espresso performance, and slightly underwhelming steaming, who is this machine for?

I think that Breville were very much trying to reduce the number of machines that get returned to them by people frustrated with the learning curve of home espresso. And for all intents and purposes, the Barista Express Impress does that.

The setup process to get running is shockingly simplified with the new tamping system, and if you’re buying this for someone who’s never made an espresso in their life, this is a pretty safe bet to help them get their foot in the door.

With that being said, you are paying for that ease of use. If you’re already someone who’s comfortable with the espresso making process and dialing in, then you’d likely be better off going with the TOTALLY redesigned, faster steaming, and better looking, Barista Pro. It all comes down to skill level and willingness to Pfaff around with puck prep early in the morning.