When Breville released the Bambino, I was shocked by the extremely small form factor. But for years before the Bambino even existed, Delonghi was selling an equally compact system, the Dedica. These two entry-level machines have a LOT of similarities, but also a couple significant differences. So which one is going to be best for you? Today we find out! 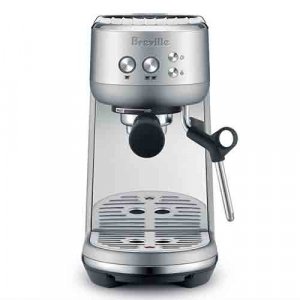 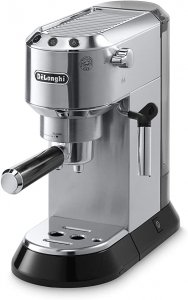 Starting off as we always do with build quality and design, these two machines are quite comparable. Both use a mixture of plastic and metal parts, but they chose to do so in slightly different areas. The body of the Breville is stainless steel, while the Delonghi is plastic. But, the Delonghi has a heavier portafilter, and a metal steam switch.

In terms of size, they carry essentially the exact same footprint at around 13” deep by 12” tall, and 6 inches wide, but the Bambino does clock in heavier at 11 pounds compared to the Dedicas 9 pounds.

Aesthetics will always be subjective, and these machines are so simple looking that I don’t think I could pick one over the other based on looks alone. However, the Delonghi is available in a few different colors, whereas the Breville is only available in silver at the time of this video.

The user interface on both of these machines is also quite similar. They both have programmable single and double shot buttons, as well as one to heat up to steaming temperature. On the Bambino, the steam will start right away, whereas on the Dedica you change the boiler temperature, and then start and stop it using this switch on the side. I much prefer the way that Delonghi has done this, because it allows you to easily stop and start the steam as you wish. On the Bambino, the steam is either running, or the machine is trying to cool itself back down

Another small thing that I preferred on the Dedica was that it has a dedicated power button. This is not only more intuitive, but it also allows you to program it to turn on in the morning using something like a smart switch or timer. On the Bambino you have to remember which two buttons to hold together in order to turn it off, and it can’t be programmed to turn on the same way.

Warm up time on the Bambino was much quicker than on the Dedica, taking a blazing fast 3 seconds to get up to temperature. The Dedica on the other hand took a still respectable 40 seconds.

When comparing these two based on their espresso quality, they are going to produce very similar results when using pressurized filter baskets and pre-ground coffee. Pressurized baskets have only one pin hole, and allow for you to use pre-ground coffee, or a less expensive coffee grinder, and still get decent results. I think that at this level, this is the way many users will opt to use these machines.

One advantage that the Dedica has over the Bambino is the ability to change the brewing temperature. This is not necessarily aimed at those who want a hotter or cooler drink, but instead helps adjust the extraction for lighter or darker roasts.

If in the future you want to upgrade your espresso quality by purchasing a dedicated espresso burr grinder, it is possible to upgrade to non-pressurized traditional filter baskets on both, and even bottomless portafilters. In this situation, however, the Breville Bambino has a significant advantage. It’s wider 54mm baskets and more traditional 9 bar brew pressure is much better suited to non-pressurized use. I was able pull much more consistent non-pressurized shots on the Breville. Not to mention, there are a far wider range of aftermarket accessories for 54mm machines compared to the less-common 51mm of the Dedica. These accessories become useful when you start playing around with less forgiving non-pressurized extractions.

Another advantage of the Bambino is its manual shot mode. This allows you to hold a low-pressure pre-infusion, then decide when to ramp up to full pressure, and stop the shot as you wish.

Steaming is another area where these two machines begin to diverge from one another. The Bambino opts to use a single hole steam arm, whereas the Dedica features a pannarello. One is not necessarily better than the other, they are merely targeted at different end-users.

This results in a more coarse foam, compared to the variety of textures you can create with a manual steam arm, Anything from coarse cappuccino foam to very fine latte foam. Now don’t be fooled, it will take some practise to learn to steam properly on the Bambino, but if you do, it will offer you more flexibility and control.

A slight hack that can be used to achieve similar control on the Dedica is to remove the outer pannarello cover. This will stop the automatic introduction of air, and give you more control. Also keep in mind they do offer an essentially identical model with a manual steam arm called the Dedica Arte.

In terms of steaming speed, the Bambino did transition between brewing and steaming about 5 seconds faster, but once up to temperature they both took around the same time to heat milk up to a standard temperature of 60 degrees Celsius.

So to wrap this up, I was left feeling relatively satisfied that these are both good entry-level machines for the price, but are targeted at slightly different end users.

The Dedica is overall a more convenience oriented. It had better pressurized and pre-ground espresso performance, and a panarello will be more convenient for those who aren’t as picky about getting the absolute perfect milk texture.

The Bambino will offer a faster start-up, and the potential for better espresso performance IF you also purchase a good quality espresso grinder and use non-pressurized baskets. It also gives you the ability to create a variety of milk textures with the more manual steam arm.

Which of these features are more important will come down to your particular situation and preferences.