Breville Bambino Plus vs Infuser 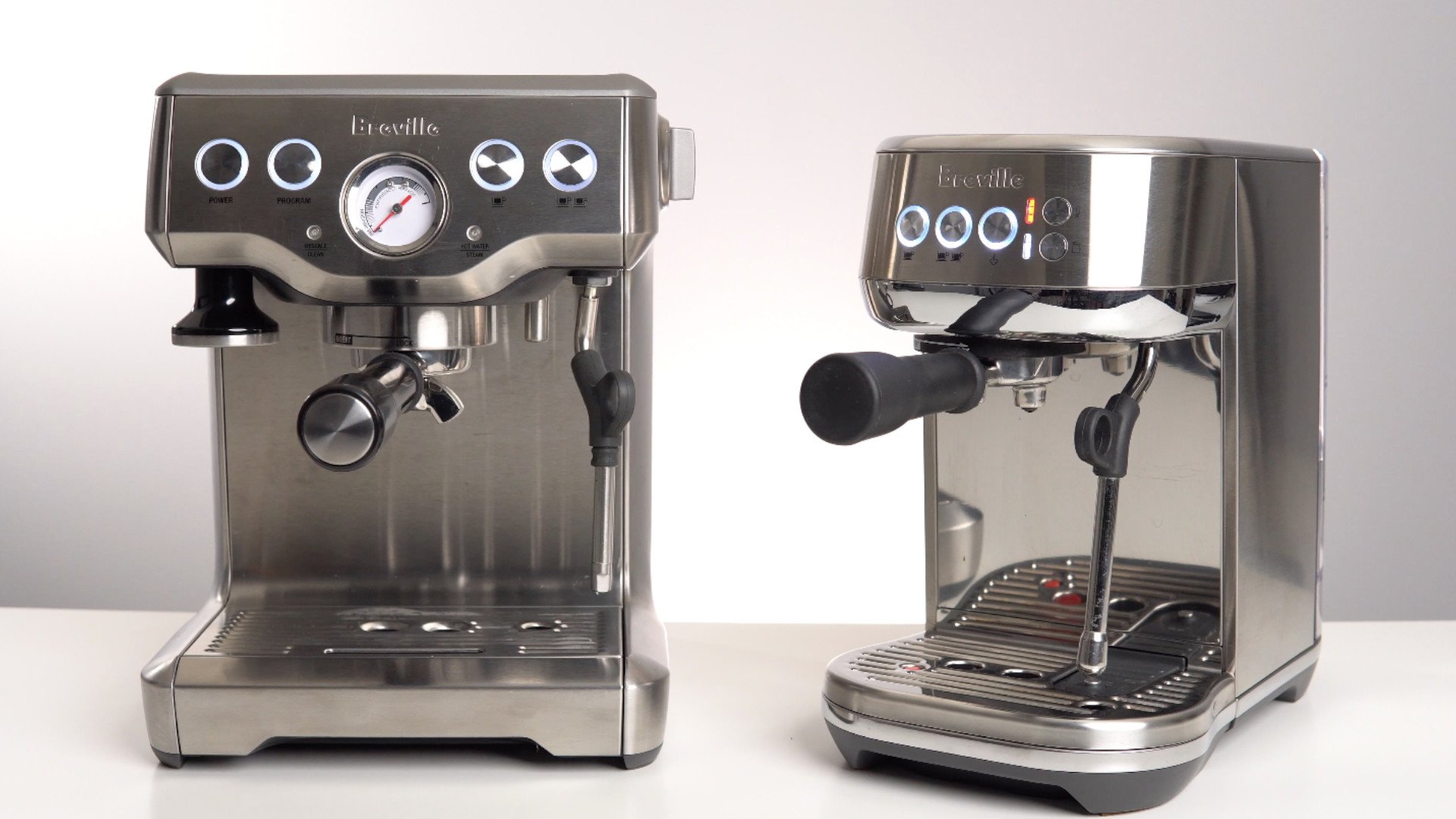 Today, we’ll be comparing two espresso machines from Breville without built in grinders. The Infuser and the Bambino Plus ring in at similar prices around the mid-point the Breville lineup. But which one is going to be best for you home and coffee-making preferences? Let’s find out!

The first and most obvious difference between these two machines is the form factor. The Bambino Plus is strikingly small width-wise, 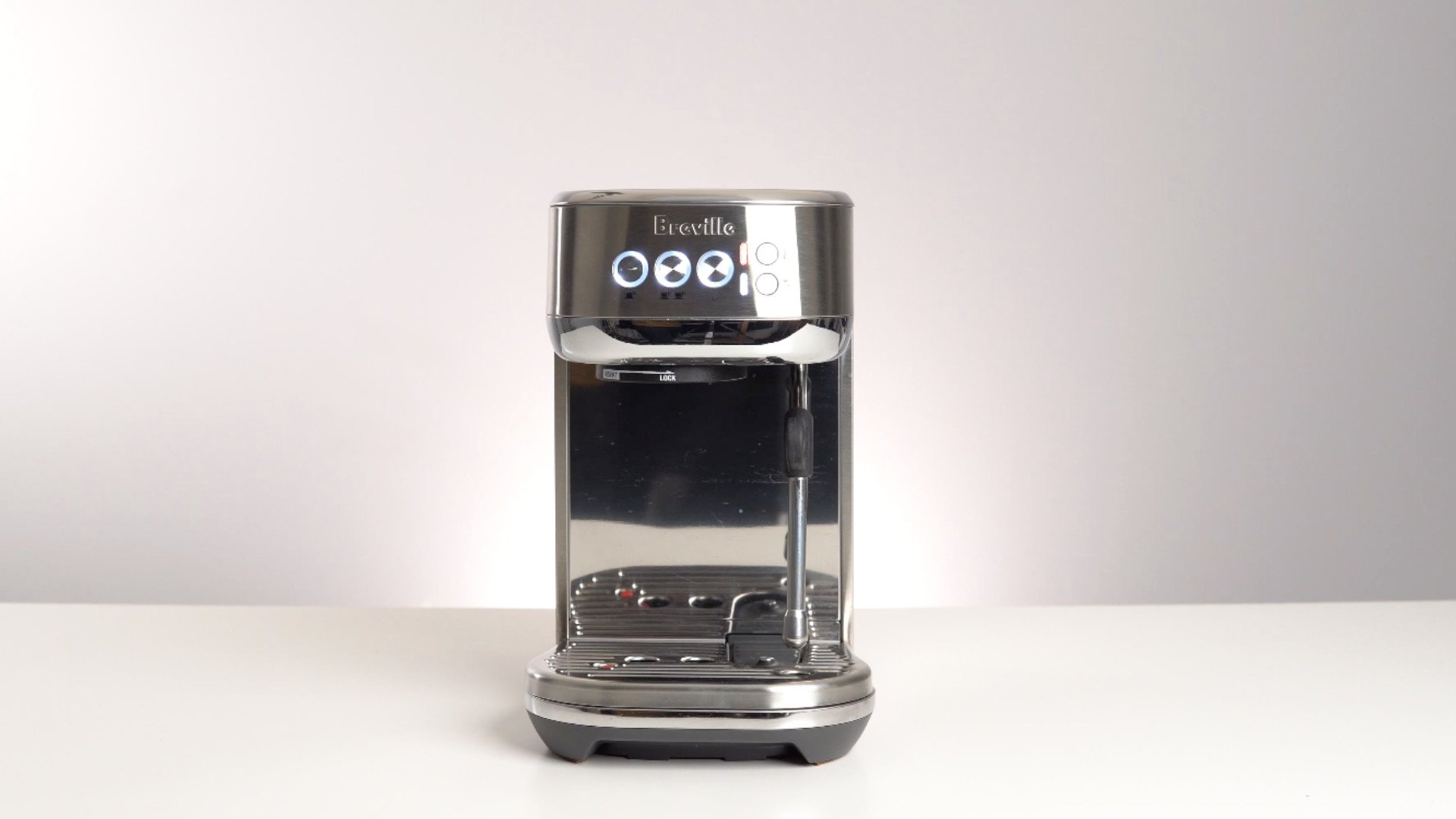 but actually adds a couple inches when it comes to the depth. 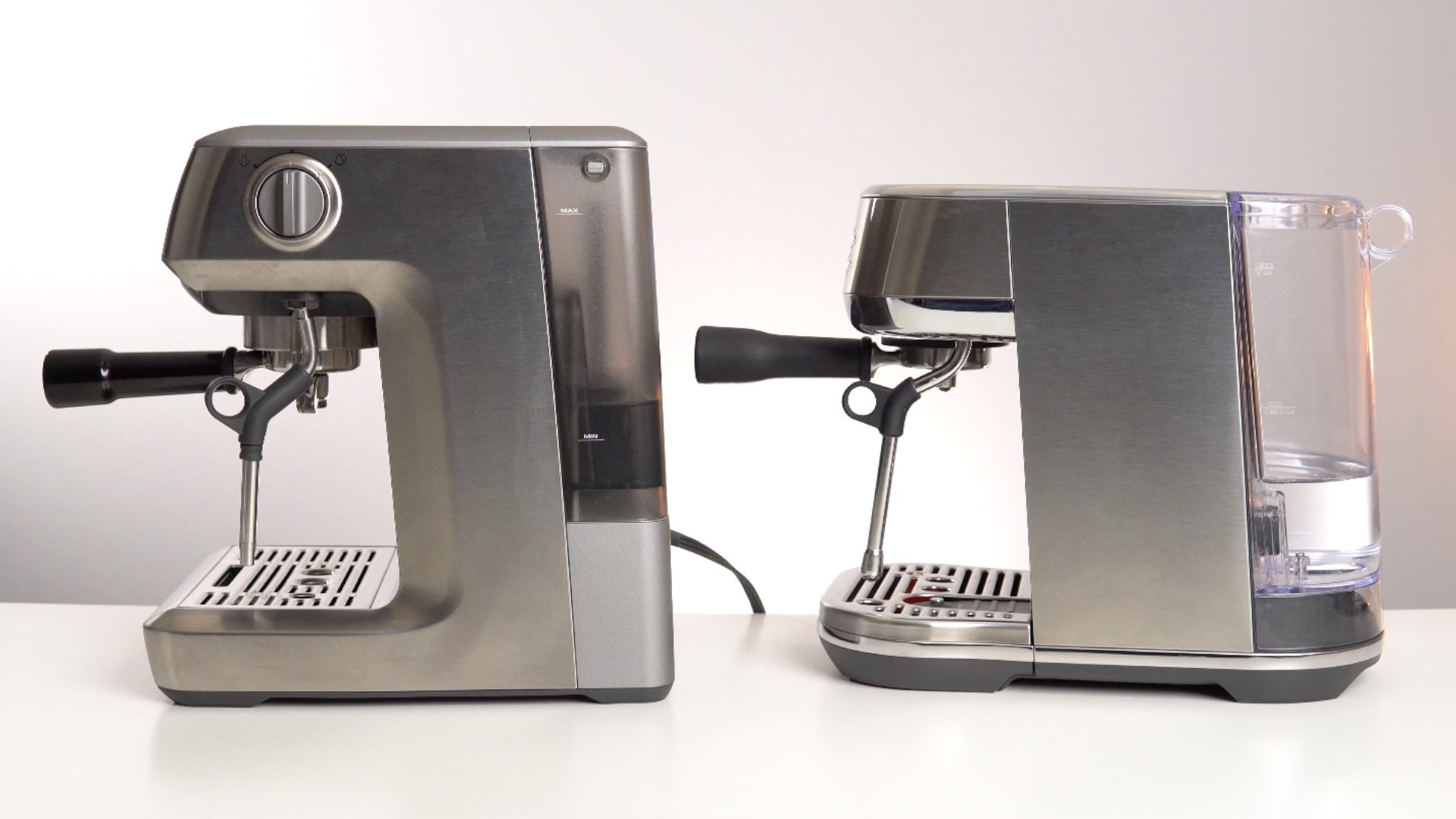 This seems like a good compromise, as counter space is normally more limited side-to-side. And while it is nice to have the larger drip tray found on the Infuser, overall the form factor advantage definitely goes to the Bambino Plus. 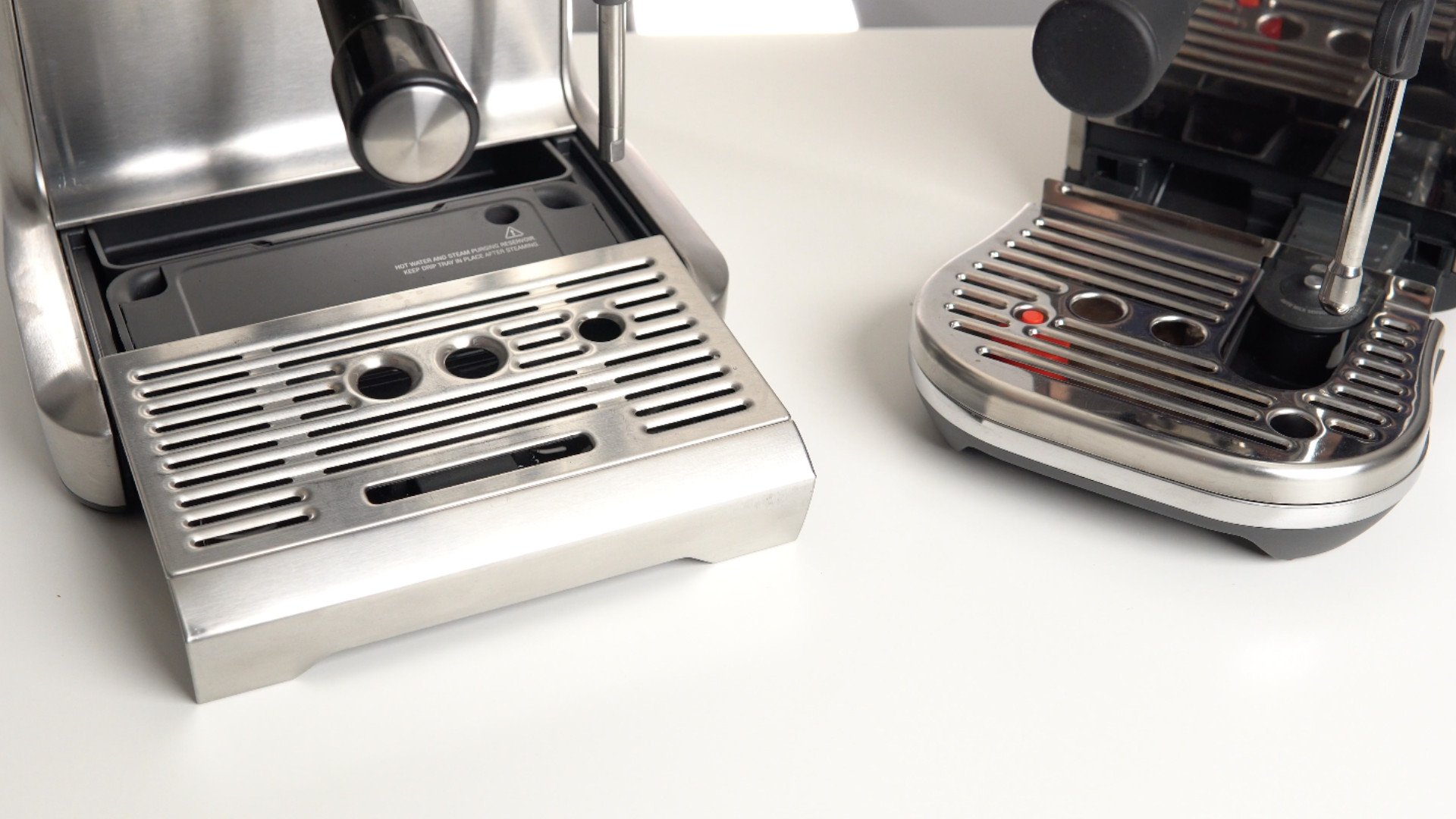 If you are primarily a latte / cappuccino drinker, the Bambino Plus has two big advantages in this department. The built in heating system is much quicker and more powerful than that of the Infuser, making it able to start up in only 3 seconds.

And being more powerful, means that it can also steam milk much more quickly, taking 40 seconds to reach 60 degrees, vs 58 seconds on the Infuser.

For these reasons alone, the Bambino Plus is a better machine when it comes to steaming, but it doesn’t stop there. The Bambino also includes AUTOMATIC milk texturing and temperature. Meaning all you need to do is choose one of 3 levels of temperature, and 3 levels of texture, 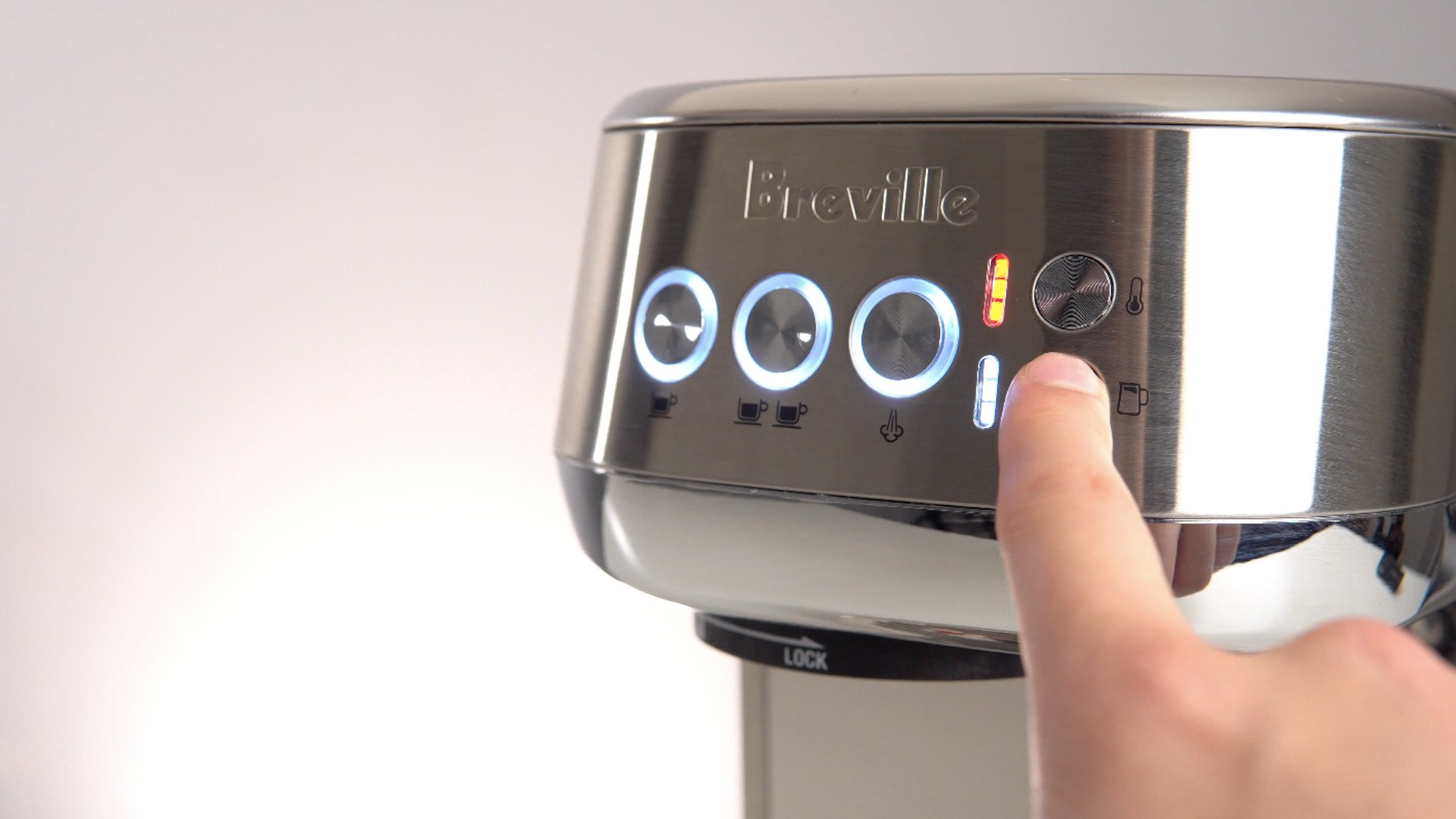 and the machine will take care of the rest using a smart air introduction system and temperature sensor built-in to the base. 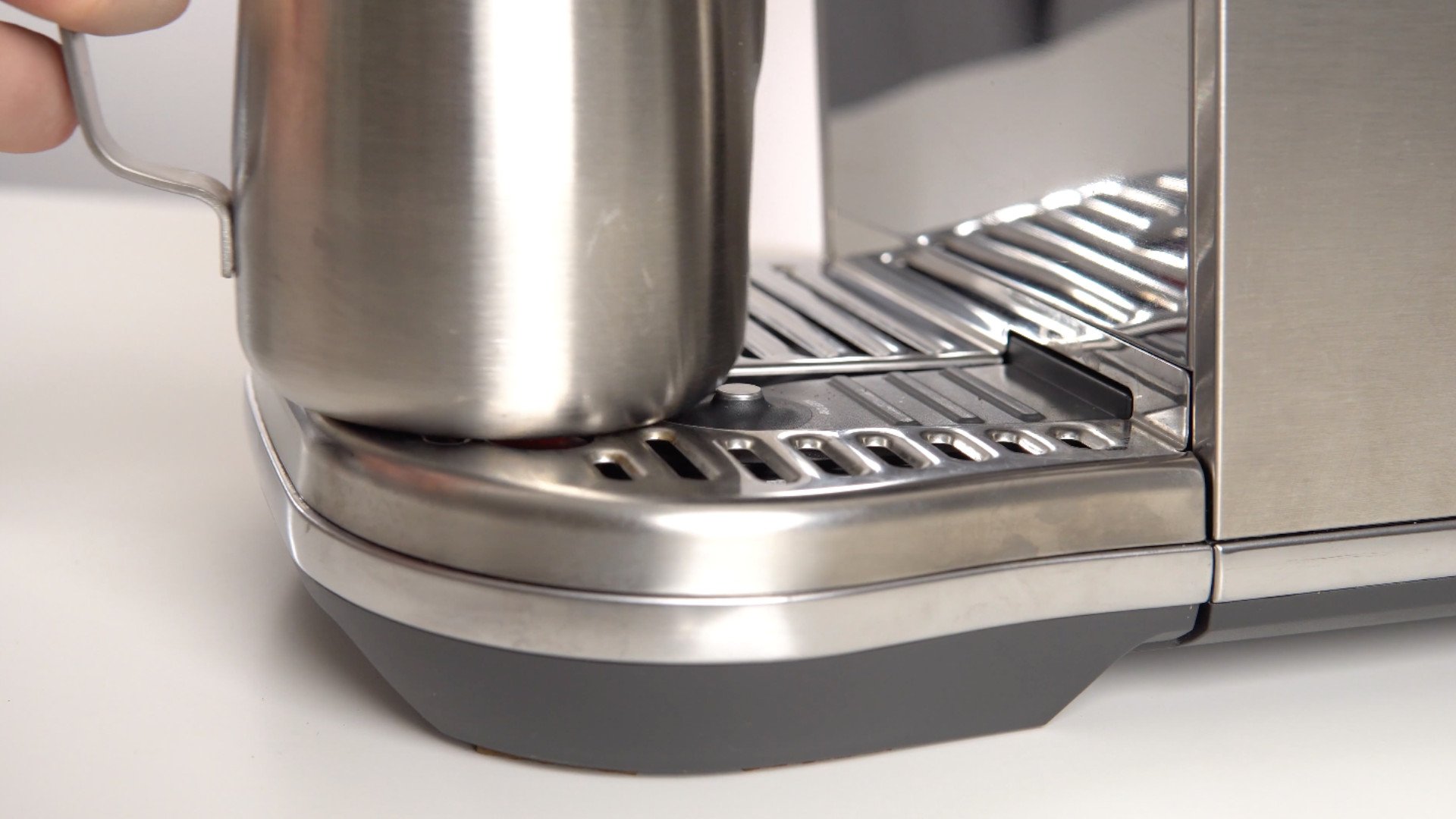 In comparison, texturing and heating on the Infuser needs to be controlled completely manually. Another point to the Bambino Plus.

The first thing we noticed was that the portafilters included with both of these machines are different. The Infuser comes with a more solid feeling spouted portafilter, while the Bambino Plus comes with a slightly more plasticky Dual Hole portafilter. 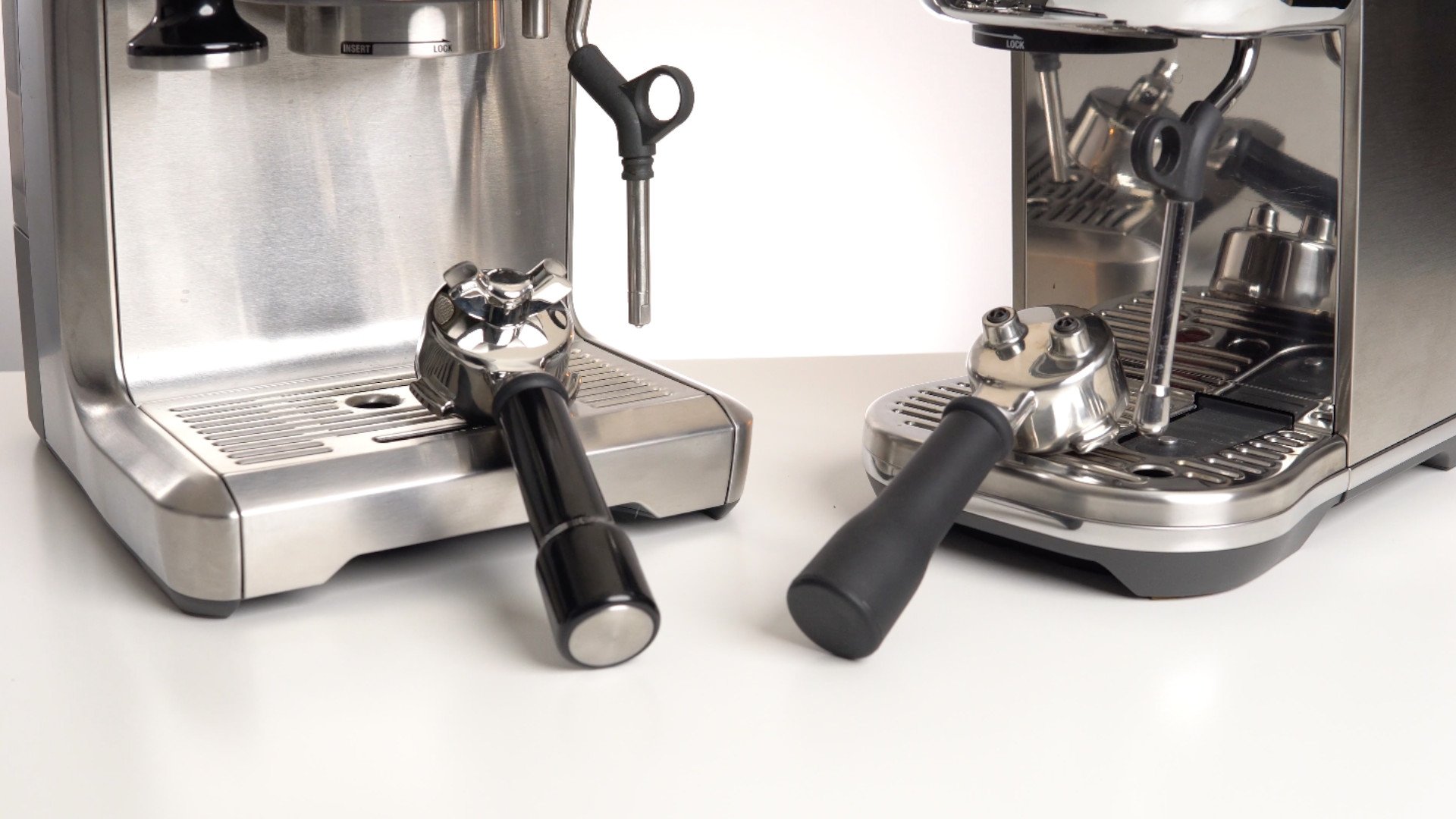 As a reminder, pressurized filter baskets will allow you to use pre-ground coffee, while non-pressurized baskets are more traditional, but require you to have a good quality espresso burr grinder. 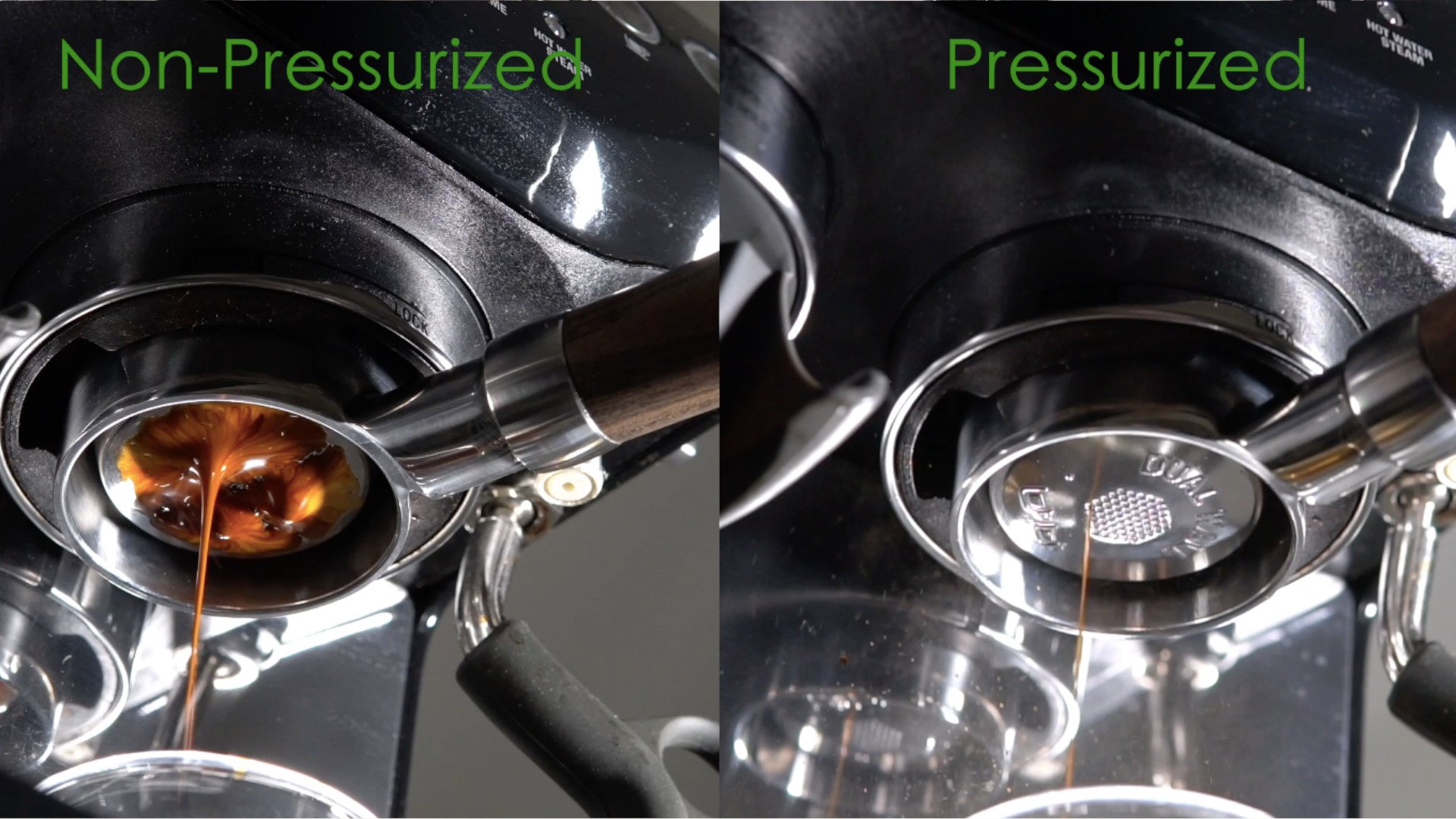 If you are in one of the areas where Breville only includes pressurized filters, don’t worry, as you CAN buy additional filter baskets, and even portafilters for this machine.

Other than the included portafilter and filter baskets, there are three other benefits to the Infuser over the Bambino Plus when it comes to coffee making. Benefit number one, is that you have the ability to adjust the extraction temperature on the Infuser, which allows you to tweak the brew depending on whether you are using a lighter or darker roast. The Bambino Plus is locked at a standard temperature of 200 Degrees Fahrenheit.

The Infuser also includes an analog pressure gauge, which can be useful in getting a rough idea of how your espresso shot is flowing. 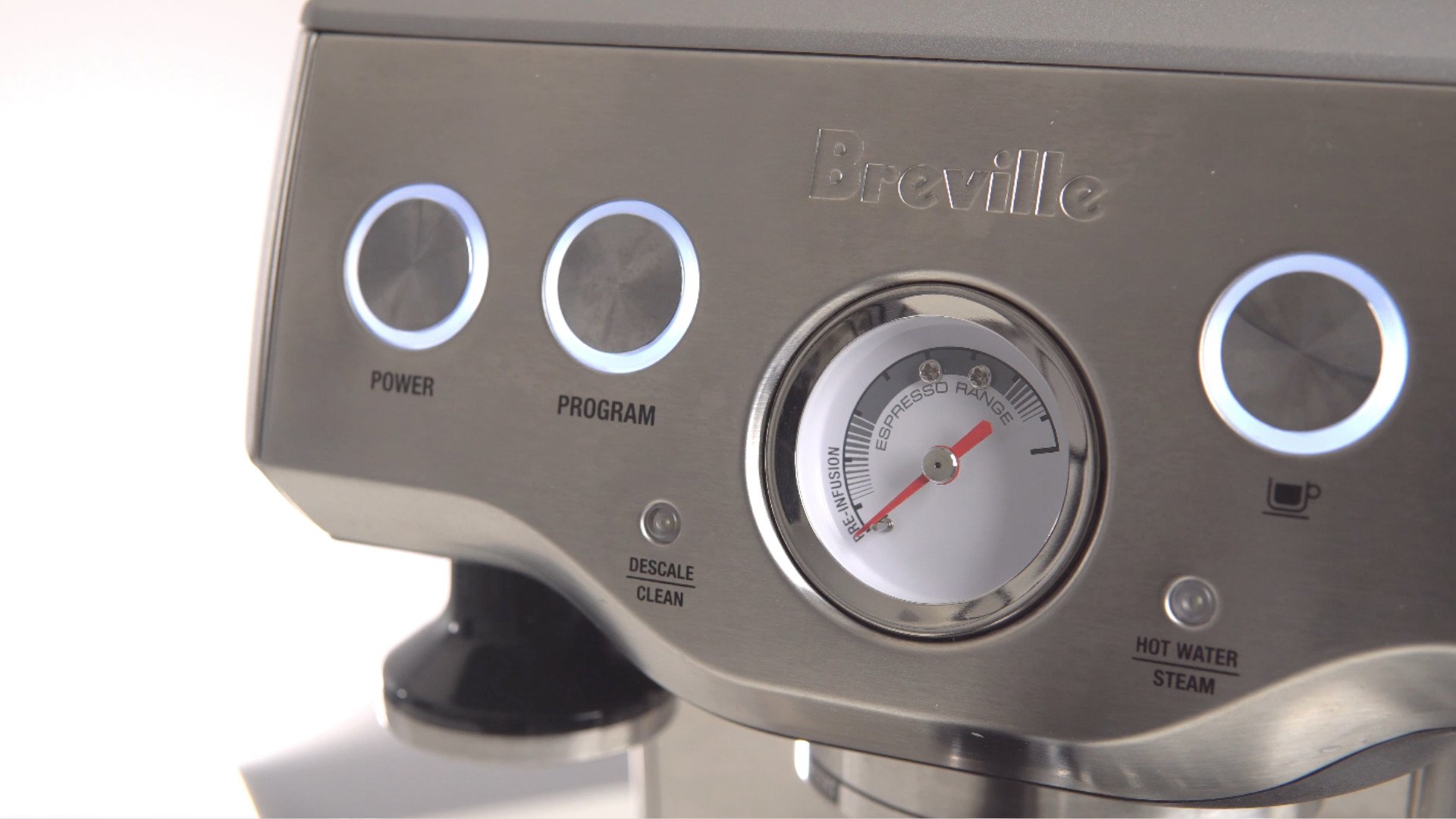 And lastly, the Infuser has a dedicated hot water outlet, which is great for making Americanos, or even just getting water quickly for other things such as tea. 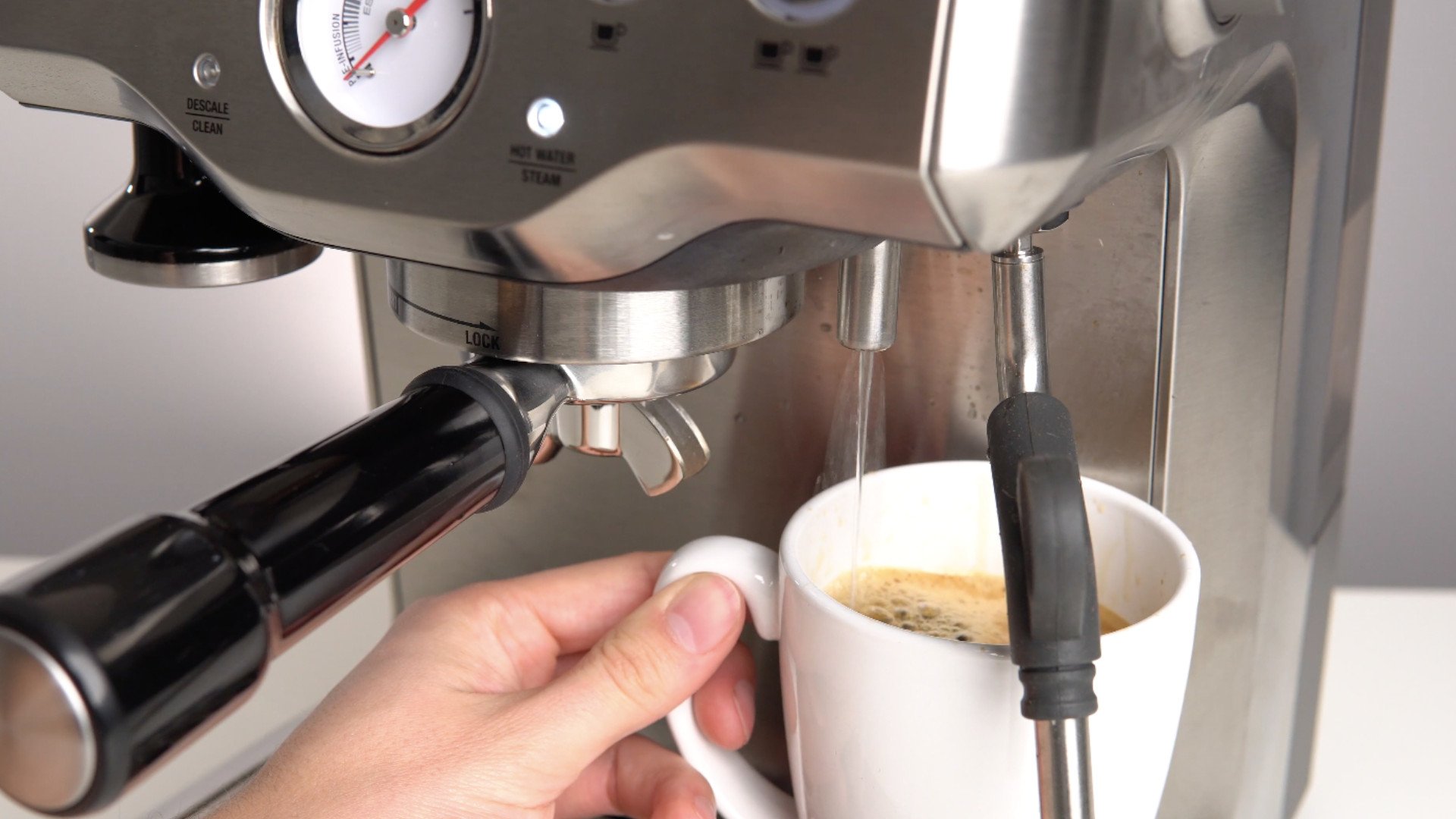 Other than those differences, the coffee making workflow is essentially the same between these two machines. They both feature low-pressure pre-infusion for a more even extraction and flavour, and they both have single and double shot buttons that can be programmed to a shot length of your choice, or controlled manually by pressing and holding.

Overall, these are quite similar machines, built with two slightly different target users in mind. If you will be primarily making milk-based drinks, the Bambino Plus is a very clear winner due to it’s superior power, and automatic steaming options. There’s no competition there. However, if you will rarely be steaming milk, are more interested in absolute coffee quality, and have a little extra counter space, then the Infuser may be the better choice thanks to it’s greater adjustability, better portafilter, and dedicated hot water outlet. 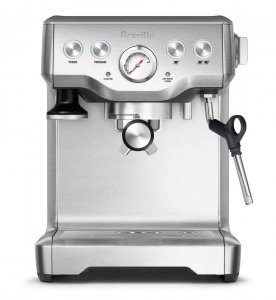 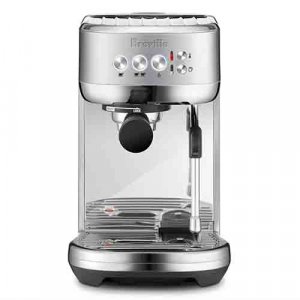