When looking for an entry to mid-level electric burr grinder, there are several names and brands that you will inevitably stumble across. And THIS, is one of them. The Baratza Sette. It has an extremely recognizable shape, and forums everywhere have no trouble recommending the Sette 30, Sette 270, and Sette 270wi variants in each of their respective price brackets. But how do they really stack up? 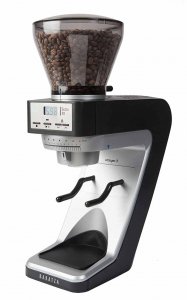 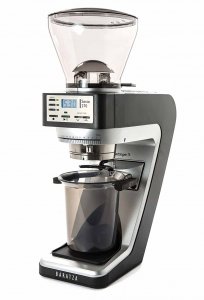 Starting off with the design and build quality, I was immediately struck by just how different this grinder is, both visually and form-factor wise. Personally I kind of like the unique looks, but I can definitely see them being a little divisive depending on the styling of the kitchen you plan to put it in.

The countertop footprint is extremely compact, but it then sweeps up to a wider top section. And perched on top of THAT is a 400 gram hopper. The result is a grinder that appears a little visually top-heavy, but in reality is relatively sturdy. The main issue for me was the overall height. You’ll have to measure your own kitchen, but in mine, the 15.75” total height just barely blocked my overhead cabinets which was far from ideal.

Moving on to build quality, most of the external parts are made of plastic, with the exception of the portafilter holder, and the actual burr assembly. This seems to be a bit of a trend for Baratza grinders, where the opt to spend most of the money on the internal components, and then have relatively basic plastic exteriors.

On the base model Sette 30, I don’t see this as being too much of an issue. However, as you start to go up the product range to the 270 and especially the 270wi, I just don’t think that this level of finishing quite matches the asking price. This is certainly one disadvantage of using the same chassis for a whole product range, but I think it’s important to note that despite being plastic it doesn’t feel CONCERNINGLY cheap. There’s no bend or flex to the shell because of the thick plastic used, and it feels like it would hold up relatively well over time.

Moving on to the user interface and user experience things were pretty straightforward. Two buttons on the right side are used to adjust the programmed grinding time, or in the case of the 270wi, weight. On the 270 models, you also get 3 buttons on the left hand side where you can program in 3 different recallable doses, for example, if you want to switch between a single, double, and triple shot baskets. The start button starts the grinding, and also allows you to pause the grind in order to settle the grounds before continuing, while a stop button will cancel the grind entirely.

The adjustability of the portafilter holder arms was really nice. The rubber grips can be rotated to suite a variety of different styles of portafilter, or even other brewing methods such as a V60 if you put the arms into their wider position. The top support for portafilters was a little finicky at times, but served its purpose well enough. I was definitely never worried about my portafilter or dosing cup dropping while grinding.

My single biggest complaint about the user experience, and possibly even the Sette lineup as a whole is the grinding volume. This thing is LOUD! If you want to make coffee early in the morning while others are sleeping, or even if you plan on making coffee while entertaining, the volume of these grinders could be a concern. (sound sample) It’s definitely not a grinder where you can carry on with your conversation while it’s running, and this might be in part due to the unique mechanics of this grinder.

The Sette grinders operate in an opposite way to most other conical burr grinders. Instead of the center burr rotating, it remains fixed while the outer burr rotates around it. Apparently this helps with grinding efficiency, and there might just be some merit to that, because these grinders are FAST! Grinding an 18gr dose at espresso fine took just 11 seconds. For comparison, I was programming in times closer to 16 seconds on the new Mahlkonig X54.

Grind retention was also respectable at around 0.4 or 0.5 grams between shots, which is manageable if you were considering single dosing.

The grind quality was very nice straight out of the grinder, with a fluffy texture, like really fluffy, and almost no visible clumping until I got to the absolute finest grind settings. Even then it was minimal, and definitely an improvement over something like the Breville Smart Grinder Pro or built-in grinders.

In order to grind fine enough for espresso, I did need to install two of the included shims. Luckily that process was pretty straightforward, and the required Allen key was included. Once I installed the shim, I was able to pull some nice bottomless portafilter shots, and the taste was about where I’d expect for a conical grinder in this price range. Clean, decent clarity, and body that tended a bit towards lighter side when compared to the other grinders I currently have in studio.

With this combination of good grinding quality, fast grinding speed, and good programmability, and I can see why people don’t shy away from recommending the Sette lineup.

Which one is for you?

If you’ve made it this far in the video, and are happy with what you’re hearing so far, the next question will likely be “so which one should I buy”?

All 3 of these grinders will be able to produce the same quality of grind. The choice will come down to what brew methods you intend to use, and what workflow you prefer.

If you’re not planning on making espresso, then the Sette 30 is the grinder I recommend. For the price they’re asking for that grinder, this is some great grind quality. If you aren’t making espresso, get the Sette 30. With that being said, it really isn’t going to be the best option for brew methods where you need more precise control. With 30 grind steps spanning that range of 230-950 microns, that means that each step is about a 24 micron jump. And while this might sound quite small, it’s still a little too large for truly dialing in espresso. I tried dialing in with just the upper ring on the which would be equivalent to using the Sette 30, and found myself running too fast at setting 5, but then nearly choking my machine at setting 4.

The Sette 270 solves this problem by adding a micro adjustment ring. 9 steps of micro-adjustment in between each of the existing 30 macro steps results in a combined 270 steps (hence the name). And although the coffee community likes to frown upon stepped grinders, I can assure you, the grind increments are more than small enough to be used in effectively a stepless way. An argument could even be made that this is BETTER than being stepless, because the steps are extremely small, but you also retain the ability to move EXACTLY from one setting to another maybe for pour-over, and then back again. And some VERY expensive grinders take the same approach for this exact reason.

The other feature that the Sette 270 adds besides the extra grind steps is the pre-programmable dosing buttons. This will be useful if you often switch between double and single shots, making espresso and making pour-over, or any other situations where you are changing your dose, or grind setting. If you’re someone who just plans to brew the same way with the same dose every day, then you probably won’t even touch this feature. And if that’s the case, it should be noted that you could technically save some money by buying a Sette 30, and then buying the 270 micro adjustment ring after the fact.

And finally we come to the top of the line 270wi. Instead of relying on a timed grind, the wi has a built in Acaia scale that not only weights the dose as it’s ground, but also intelligently learns when to stop the burrs to get EXACTLY the dose you want, each and every time.

I was really excited by this feature, but after using it for a month or so, I don’t think it would be my choice out of these three grinders even if money was no option. Here’s why.

When the weighing system works as intended, it allows dose consistency of plus or minus about 0.1g as shown by the display, which is extremely impressive. The first problem, is the way that it uses the cantilevered portafilter forks to make that measurement. Add in a portafilter, of unknown weight and dimensions, also cantilevered from the same point, and anyone even slightly familiar with physics will start to see the difficulties in the calculation this scale is trying to perform. What this means, is that while the dose is consistent from shot to shot, assuming you use the same portafilter, it’s not necessarily accurate when double-checked with an external scale, or if you change the vessel you’re grinding into.

The second problem, is that the system was pretty finicky. If it wasn’t happy with how the portafilter was zeroed, or you put the portafilter in too quickly, or took too long to redistribute the grinds, it would freeze up, or reset itself. Once you get a good routine going, and learn the quirks it’s fine, but it just wasn’t anywhere near as intuitive as I was hoping.

Finally, and probably the biggest issue, is that regular timed dosing grinders with a full hopper, are generally able to dose with an accuracy of plus or minus about 0.2 to 0.3 grams. So for the added cost, fuss, and extra components to potentially break or fail down the line, I simply don’t think that the added 0.1 or 0.2 grams of added accuracy is worth it.

So to conclude, or for those who skipped to the end of the video, the Sette lineup of grinders are solid options in their respective price brackets, with their only real downside being the height, and loud grinding volume. The Sette 30 will provide the same grind quality as the 270 models at a lower cost, but is not suitable for espresso due to the large steps between grind settings. Stepping up the 270 will give you an almost stepless level of grind adjustment which is more than good enough dialing in espresso, and also provides 3 programmable time based dosing buttons. The 270wi has some impressive tech built in, but in its current form the increase fussiness and price to gain marginal dosing consistency improvements make it hard to justify over the great base 270.