Sous vide is undisputedly a more accurate, convenient, and tastier way to cook food, but which sous vide cooker should you buy for your home? Today, we’ll compare the New Anova Precision Cooker to the Breville Joule in the following categories. Performance, Hardware Design, App and User Experience, and most importantly, who shamelessly copied who’s product packaging…. seriously?…. 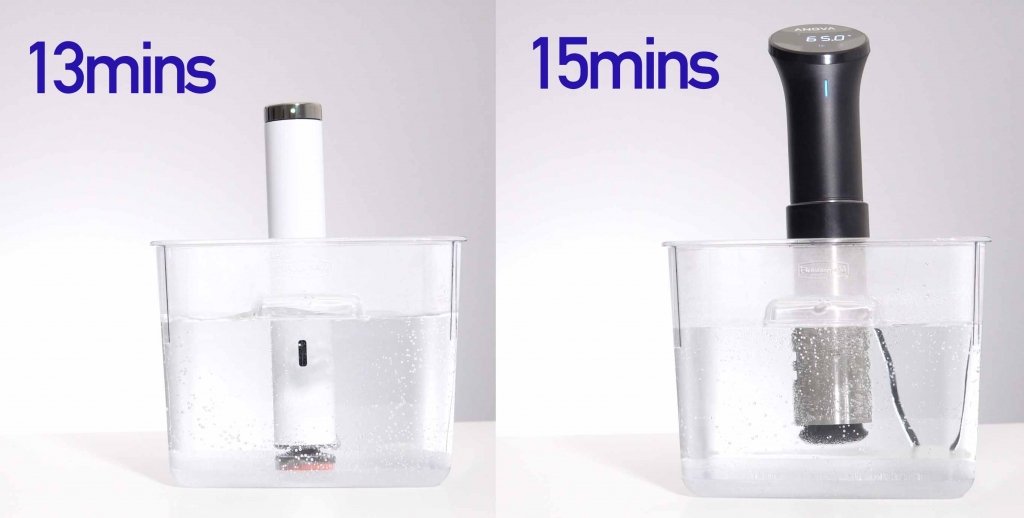 When cooking sous-vide, the only sitting and watching you find yourself doing is waiting for the water to heat up before adding in your food. Some foods with longer cook times such as steak can be put in right away without having a noticeable effect on the final product. But much like baking, if you’re cooking something delicate like fish or eggs, you want to ensure that the water is fully heated before adding in your protein. Let’s look at some more performance figures:

The smaller bit mightier Joule is the clear winner in terms of pure performance. 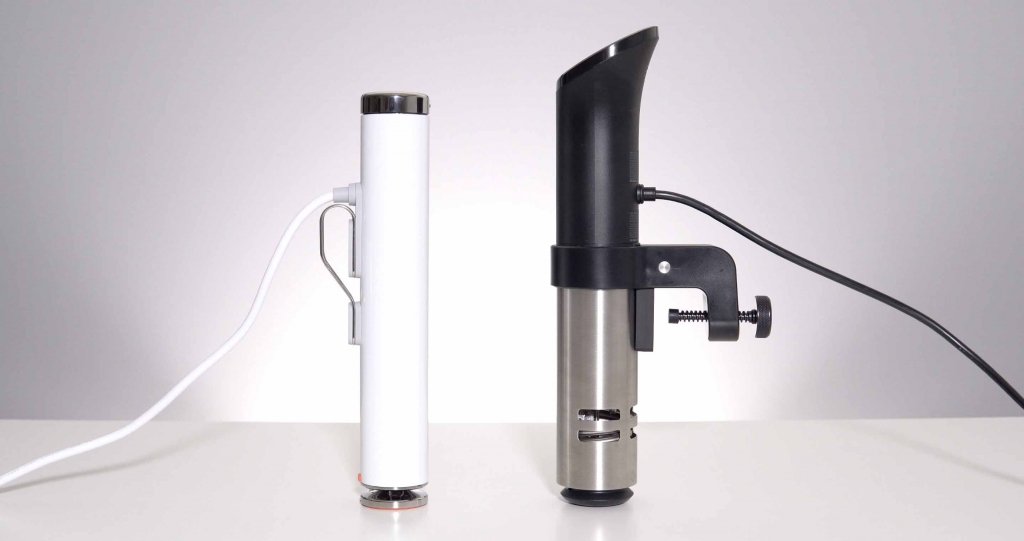 For being the same appliance, these two units do look and act quite differently, so one may in fact suit you better

The Anova is overall a significantly larger device, being taller, thicker, and heavier than the Joule. That being said, this will never be an issue unless you are using a VERY small container to cook. The more critical spec for sous vide-cookers are their minimum and maximum useable water depths. 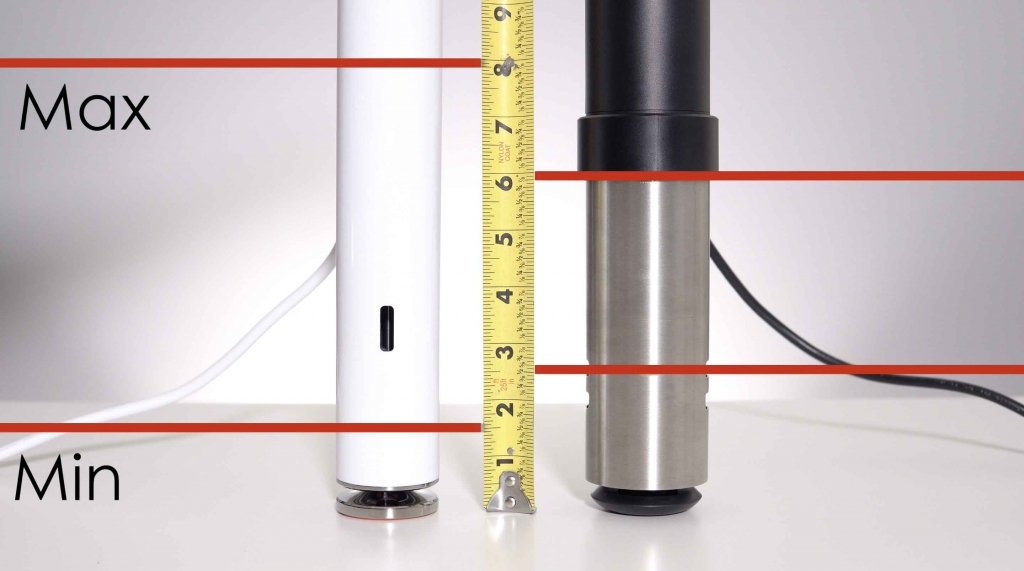 By the books, the Joule can work in both shallower AND deeper containers than the ANOVA. However, because of the way the Joule cycles water through a higher-up water outlet, submerging in anything less than 4 inches will result in a splashy and loud cooking experience…. This was a big downside for me, as it meant that I often ended up heating more water than needed, just so that the Joule would be quiet during cooking. I suppose in some ways this equals out with the Joules faster heating… but I still wish that they opted for a straight through water circulation system like on the ANOVA. 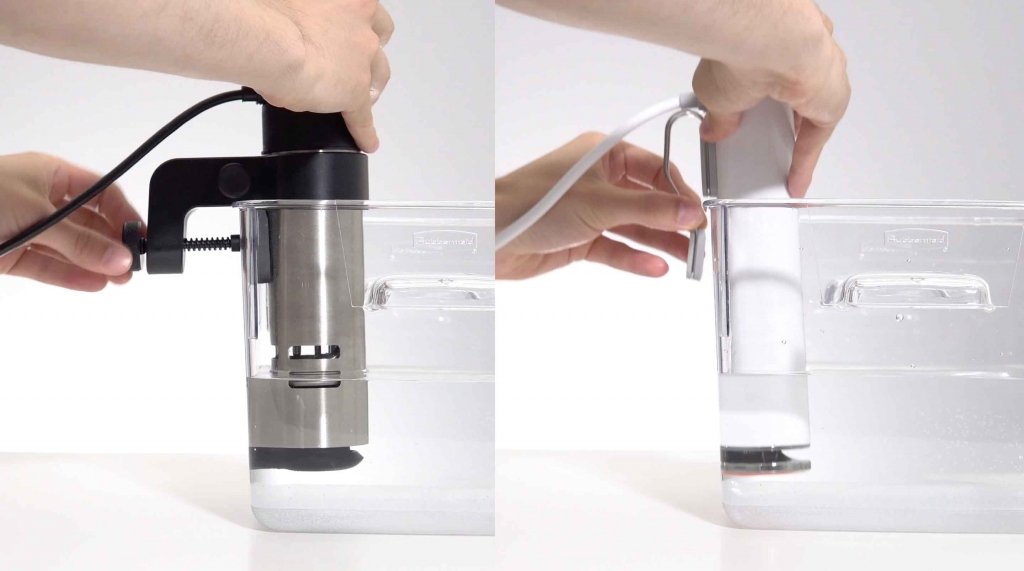 On the topic of container compatibility, the Anova uses a height-adjustable screw-down clamp to hold itself upright in your cooking container. While the Joule has a very convenient magnetic base to hold it upright in metal pots, or a long fixed position wire clamp for plastic containers. I rate these connection methods about equal. The Anova can be slightly clumsy to secure at times, and while the Joule works great in metal pots, there is no way to attach it to a shallow non-metal container. Choose your cooking container accordingly, and both will work great.

Build quality is solid on both units, but again, they took different approaches. The ANOVA has stuck to a very industrial, stainless steel and plastic build, with the stainless jacket being removable for more thorough cleaning. The Joule, has taken a page right out of Apple’s design handbook. From the minimal all white build, to the VERY apple looking power plug and connectors, the Joule is arguably a more home-kitchen friendly look. 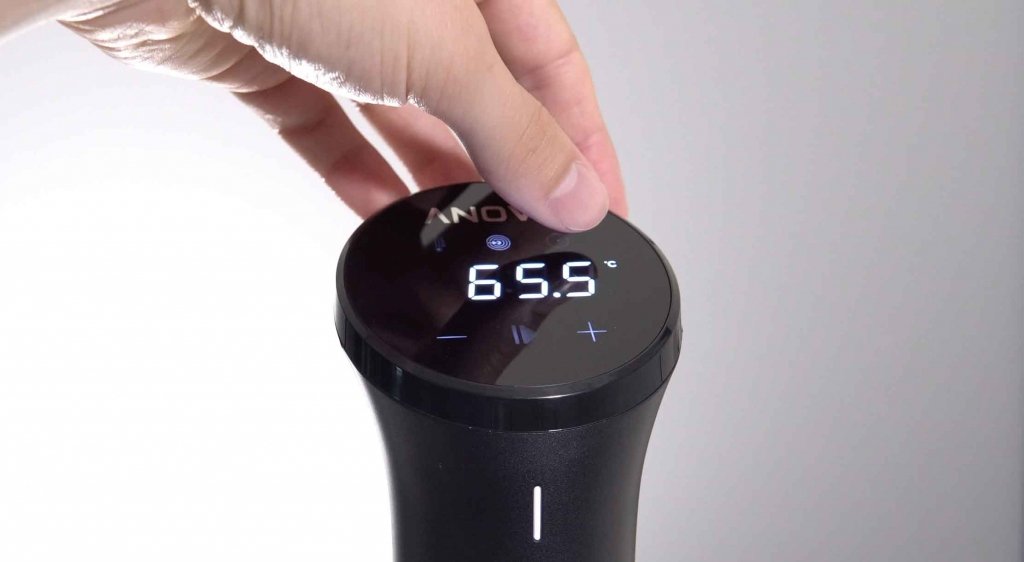 The final physical difference between these units is of course the user interface. The Anova has a touch control panel that allows you to set temperature and time manually, without the use of an external app. The Joule, has a single tactile button on the top which is used purely for simple confirmations during setup or reset. All other functionality for the Joule is controlled using a device paired by either Bluetooth or Wi-Fi, and running the app which we’ll take a look at now.

The pairing and app experience was the area where I saw the greatest differences between these two devices. Because the Joule is controlled exclusively by the app, the functionality and user experience was far superior to that of the Anova.

Pairing the Anova was a frustrating process that took me several days, and back and forth emails with Anova support… but here’s what I learned. In order to pair using a 4 digit pairing code shown on the screen, you must have freshly booted up the unit, disabled all power saving modes on your cellphone, have your cellphone connected to the 2.4 Ghz network you wish you pair to with, and then wait for the quite lengthy pairing process to complete. For me, it was upwards of 10mins and STILL failed 3 times before successfully pairing.

In contrast, pairing the Joule was very simple. No changes to cellphone settings were required, you automatically enter pairing mode upon first bootup of the app, which then finds nearby devices, and asks you to choose a wireless network. I had the Joule set up and paired within minutes of opening the app, vs days on the Anova.

The actual app and cooking experience echoed these same results.

The Anova app provides a large library of user submitted recipes, but to even cook something as simple as a chicken breast took a few minutes of reading and searching. What if I’m cooking from frozen? What if I want it more well done? Why is the time listed on this recipe different compared to the last one I just read? 9 times out of 10 I ended up simply googling something like “frozen chicken sous vide cook time” and setting the cook time manually, as it was quicker than hunting through the app. 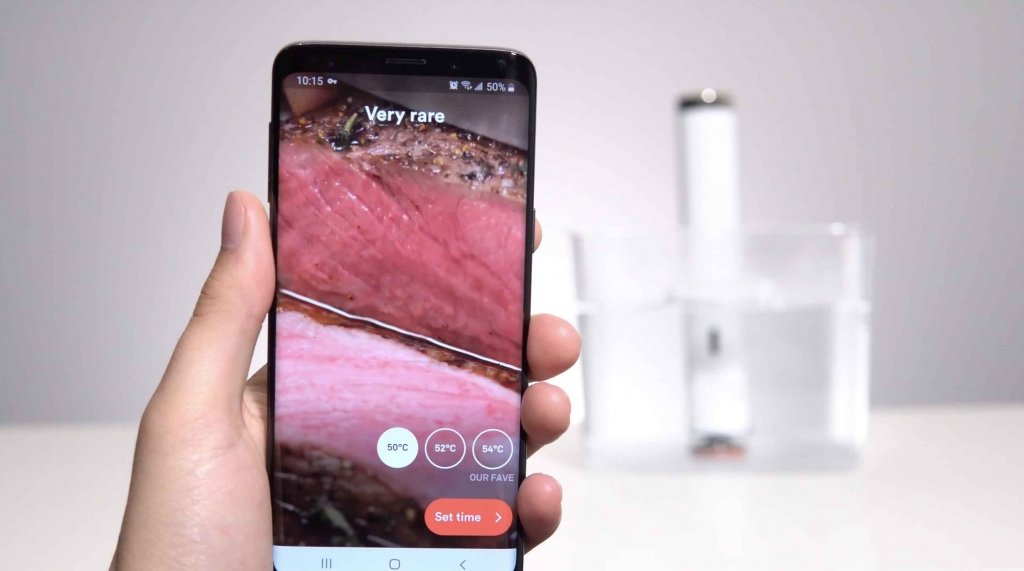 With the Joule, the cooking experience was much better, and the app was actually useful. I picked my protein, picked a visual doneness to set the temperature, then picked the size, and either fresh or frozen to set the cooking time. Again, this process took seconds on the Joule vs several minutes on the Anova. The app then showed how long until it expected the water to be heated, how long until cooking would be done, and a historical timeline of what was going on.

Heck, I could even ask my smart home to set things up for me! Which sounds gimmicky, but I’ve actually used it…

Once set up to cook, the Anova and the Joule will produce the exact same quality of food. However, out of all the minor physical differences between these two devices, the actual cooking workflow was what ended up selling me on keeping the Joule over the Anova. The Joule was a full start to finish system, while the Anova was a tool that you needed to do external research to use properly.

I do think that the Anova hardware itself is slightly better. The clamp is more versatile, and it’s a big advantage to be able to use the unit without the need for a connected app. But the countless connection issues I’ve already had with the Anova, combine with an app that doesn’t add much value over just plain Google, meant that in the end I’ll be keeping the Joule for it’s overall better user experience. 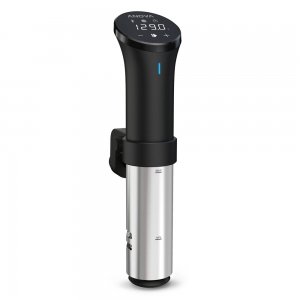 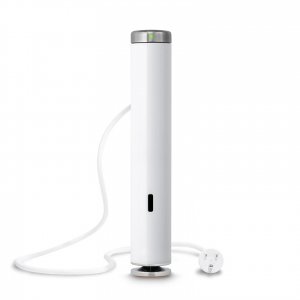 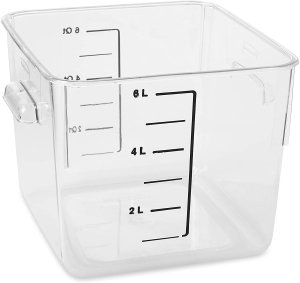